Infrared thermography as a tool to detect hoof lesions in sheep 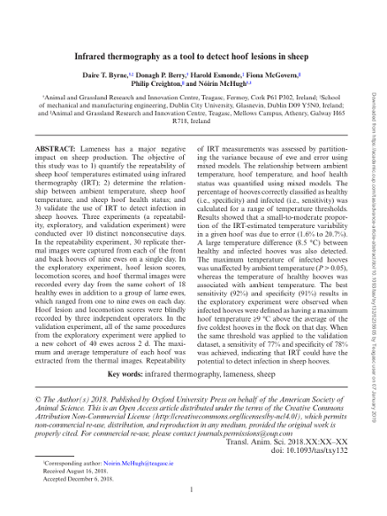 Lameness has a major negative impact on sheep production. The objective of this study was to 1) quantify the repeatability of sheep hoof temperatures estimated using infrared thermography (IRT); 2) determine the relationship between ambient temperature, sheep hoof temperature, and sheep hoof health status; and 3) validate the use of IRT to detect infection in sheep hooves. Three experiments (a repeatability, exploratory, and validation experiment) were conducted over 10 distinct nonconsecutive days. In the repeatability experiment, 30 replicate thermal images were captured from each of the front and back hooves of nine ewes on a single day. In the exploratory experiment, hoof lesion scores, locomotion scores, and hoof thermal images were recorded every day from the same cohort of 18 healthy ewes in addition to a group of lame ewes, which ranged from one to nine ewes on each day. Hoof lesion and locomotion scores were blindly recorded by three independent operators. In the validation experiment, all of the same procedures from the exploratory experiment were applied to a new cohort of 40 ewes across 2 d. The maximum and average temperature of each hoof was extracted from the thermal images. Repeatability of IRT measurements was assessed by partitioning the variance because of ewe and error using mixed models. The relationship between ambient temperature, hoof temperature, and hoof health status was quantified using mixed models. The percentage of hooves correctly classified as healthy (i.e., specificity) and infected (i.e., sensitivity) was calculated for a range of temperature thresholds. Results showed that a small-to-moderate proportion of the IRT-estimated temperature variability in a given hoof was due to error (1.6% to 20.7%). A large temperature difference (8.5 °C) between healthy and infected hooves was also detected. The maximum temperature of infected hooves was unaffected by ambient temperature (P > 0.05), whereas the temperature of healthy hooves was associated with ambient temperature. The best sensitivity (92%) and specificity (91%) results in the exploratory experiment were observed when infected hooves were defined as having a maximum hoof temperature ≥9 °C above the average of the five coldest hooves in the flock on that day. When the same threshold was applied to the validation dataset, a sensitivity of 77% and specificity of 78% was achieved, indicating that IRT could have the potential to detect infection in sheep hooves.

Department of Agriculture, Food, and the Marine