Can herbage nitrogen fractionation in Lolium perenne be improved by herbage management? 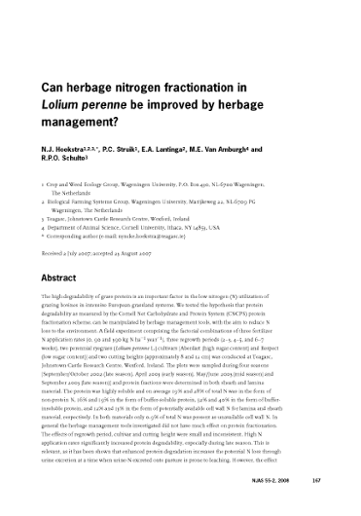 The high degradability of grass protein is an important factor in the low nitrogen (N) utilization of grazing bovines in intensive European grassland systems. We tested the hypothesis that protein degradability as measured by the Cornell Net Carbohydrate and Protein System (CNCPS) protein fractionation scheme, can be manipulated by herbage management tools, with the aim to reduce N loss to the environment. A field experiment comprising the factorial combinations of three fertilizer N application rates (0, 90 and 390 kg N ha−1 year−1), three regrowth periods (2–3, 4–5, and 6–7 weeks), two perennial ryegrass (Lolium perenne L.) cultivars [Aberdart (high sugar content) and Respect (low sugar content)] and two cutting heights (approximately 8 and 12 cm) was conducted at Teagasc, Johnstown Castle Research Centre, Wexford, Ireland. The plots were sampled during four seasons [September/October 2002 (late season), April 2003 (early season), May/June 2003 (mid season) and September 2003 (late season)] and protein fractions were determined in both sheath and lamina material. The protein was highly soluble and on average 19% and 28% of total N was in the form of non-protein N, 16% and 19% in the form of buffer-soluble protein, 52% and 40% in the form of buffer-insoluble protein, and 12% and 13% in the form of potentially available cell wall N for lamina and sheath material, respectively. In both materials only 0.9% of total N was present as unavailable cell wall N. In general the herbage management tools investigated did not have much effect on protein fractionation. The effects of regrowth period, cultivar and cutting height were small and inconsistent. High N application rates significantly increased protein degradability, especially during late season. This is relevant, as it has been shown that enhanced protein degradation increases the potential N loss through urine excretion at a time when urine-N excreted onto pasture is prone to leaching. However, the effect was most evident for sheath material, which forms only a small proportion of the animals' intake. It was concluded that there appears to be little scope for manipulating the herbage-N fractionation through herbage management. The consequences for modelling herbage quality could be positive as there does not seem to be a need to model the individual N fractions; in most cases the N fractions can be expressed as a fixed proportion of total N instead.