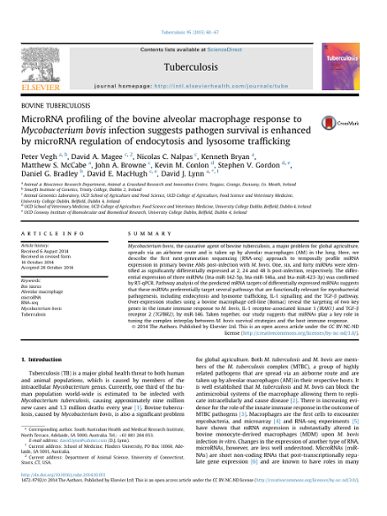 Mycobacterium bovis, the causative agent of bovine tuberculosis, a major problem for global agriculture, spreads via an airborne route and is taken up by alveolar macrophages (AM) in the lung. Here, we describe the first next-generation sequencing (RNA-seq) approach to temporally profile miRNA expression in primary bovine AMs post-infection with M. bovis. One, six, and forty miRNAs were identified as significantly differentially expressed at 2, 24 and 48 h post-infection, respectively. The differential expression of three miRNAs (bta-miR-142-5p, bta-miR-146a, and bta-miR-423-3p) was confirmed by RT-qPCR. Pathway analysis of the predicted mRNA targets of differentially expressed miRNAs suggests that these miRNAs preferentially target several pathways that are functionally relevant for mycobacterial pathogenesis, including endocytosis and lysosome trafficking, IL-1 signalling and the TGF-β pathway. Over-expression studies using a bovine macrophage cell-line (Bomac) reveal the targeting of two key genes in the innate immune response to M. bovis, IL-1 receptor-associated kinase 1 (IRAK1) and TGF-β receptor 2 (TGFBR2), by miR-146. Taken together, our study suggests that miRNAs play a key role in tuning the complex interplay between M. bovis survival strategies and the host immune response.