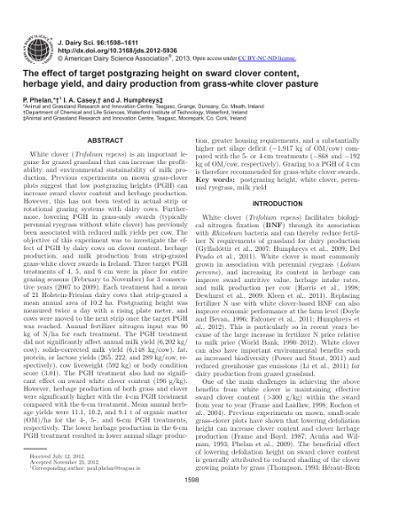 White clover (Trifolium repens) is an important legume for grazed grassland that can increase the profitability and environmental sustainability of milk production. Previous experiments on mown grass-clover plots suggest that low postgrazing heights (PGH) can increase sward clover content and herbage production. However, this has not been tested in actual strip or rotational grazing systems with dairy cows. Furthermore, lowering PGH in grass-only swards (typically perennial ryegrass without white clover) has previously been associated with reduced milk yields per cow. The objective of this experiment was to investigate the effect of PGH by dairy cows on clover content, herbage production, and milk production from strip-grazed grass-white clover swards in Ireland. Three target PGH treatments of 4, 5, and 6 cm were in place for entire grazing seasons (February to November) for 3 consecutive years (2007 to 2009). Each treatment had a mean of 21 Holstein-Friesian dairy cows that strip-grazed a mean annual area of 10.2 ha. Postgrazing height was measured twice a day with a rising plate meter, and cows were moved to the next strip once the target PGH was reached. Annual fertilizer nitrogen input was 90 kg of N/ha for each treatment. The PGH treatment did not significantly affect annual milk yield (6,202 kg/cow), solids-corrected milk yield (6,148 kg/cow), fat, protein, or lactose yields (265, 222, and 289 kg/cow, respectively), cow liveweight (592 kg) or body condition score (3.01). The PGH treatment also had no significant effect on sward white clover content (196 g/kg). However, herbage production of both grass and clover were significantly higher with the 4-cm PGH treatment compared with the 6-cm treatment. Mean annual herbage yields were 11.1, 10.2, and 9.1 t of organic matter (OM)/ha for the 4-, 5-, and 6-cm PGH treatments, respectively. The lower herbage production in the 6-cm PGH treatment resulted in lower annual silage production, greater housing requirements, and a substantially higher net silage deficit (−1,917 kg of OM/cow) compared with the 5- or 4-cm treatments (−868 and −192 kg of OM/cow, respectively). Grazing to a PGH of 4 cm is therefore recommended for grass-white clover swards.