The gut microbiota and the liver. Pathophysiological and clinical implications 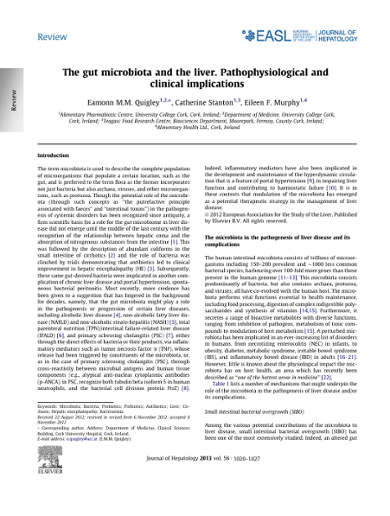 The term microbiota is used to describe the complete population of microorganisms that populate a certain location, such as the gut, and is preferred to the term flora as the former incorporates not just bacteria but also archaea, viruses, and other microorganisms, such as protozoa. Though the potential role of the microbiota (through such concepts as ‘‘the putrefactive principle associated with faeces’’ and ‘‘intestinal toxins’’) in the pathogenesis of systemic disorders has been recognized since antiquity, a firm scientific basis for a role for the gut microbiome in liver disease did not emerge until the middle of the last century with the recognition of the relationship between hepatic coma and the absorption of nitrogenous substances from the intestine [1]. This was followed by the description of abundant coliforms in the small intestine of cirrhotics [2] and the role of bacteria was clinched by trials demonstrating that antibiotics led to clinical improvement in hepatic encephalopathy (HE) [3]. Subsequently, these same gut-derived bacteria were implicated in another complication of chronic liver disease and portal hypertension, spontaneous bacterial peritonitis. Most recently, more credence has been given to a suggestion that has lingered in the background for decades, namely, that the gut microbiota might play a role in the pathogenesis or progression of certain liver diseases, including alcoholic liver disease [4], non-alcoholic fatty liver disease (NAFLD) and non-alcoholic steato-hepatitis (NASH) [5], total parenteral nutrition (TPN)/intestinal failure-related liver disease (IFALD) [6], and primary sclerosing cholangitis (PSC) [7], either through the direct effects of bacteria or their products, via inflammatory mediators such as tumor necrosis factor a (TNF), whose release had been triggered by constituents of the microbiota, or, as in the case of primary sclerosing cholangitis (PSC), through cross-reactivity between microbial antigens and human tissue components (e.g., atypical anti-nuclear cytoplasmic antibodies (p-ANCA), in PSC, recognize both tubulin beta isoform 5 in human neutrophils, and the bacterial cell division protein FtsZ) [8]. Indeed, inflammatory mediators have also been implicated in the development and maintenance of the hyperdynamic circulation that is a feature of portal hypertension [9], in impairing liver function and contributing to haemostatic failure [10]. It is in these contexts that modulation of the microbiota has emerged as a potential therapeutic strategy in the management of liver disease
ae974a485f413a2113503eed53cd6c53
https://doi.org/10.1016/j.jhep.2012.11.023