Evaluation of the ’Irish Rules’: The Potato Late Blight Forecasting Model and Its Operational Use in the Republic of Ireland 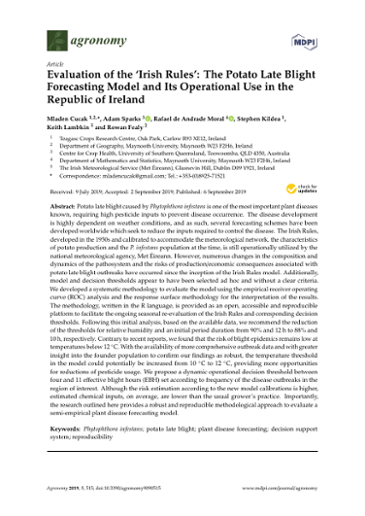 Potato late blight caused by Phytophthora infestans is one of the most important plant diseases known, requiring high pesticide inputs to prevent disease occurrence. The disease development is highly dependent on weather conditions, and as such, several forecasting schemes have been developed worldwide which seek to reduce the inputs required to control the disease. The Irish Rules, developed in the 1950s and calibrated to accommodate the meteorological network, the characteristics of potato production and the P. infestans population at the time, is still operationally utilized by the national meteorological agency, Met Éireann. However, numerous changes in the composition and dynamics of the pathosystem and the risks of production/economic consequences associated with potato late blight outbreaks have occurred since the inception of the Irish Rules model. Additionally, model and decision thresholds appear to have been selected ad hoc and without a clear criteria. We developed a systematic methodology to evaluate the model using the empirical receiver operating curve (ROC) analysis and the response surface methodology for the interpretation of the results. The methodology, written in the R language, is provided as an open, accessible and reproducible platform to facilitate the ongoing seasonal re-evaluation of the Irish Rules and corresponding decision thresholds. Following this initial analysis, based on the available data, we recommend the reduction of the thresholds for relative humidity and an initial period duration from 90% and 12 h to 88% and 10 h, respectively. Contrary to recent reports, we found that the risk of blight epidemics remains low at temperatures below 12 °C. With the availability of more comprehensive outbreak data and with greater insight into the founder population to confirm our findings as robust, the temperature threshold in the model could potentially be increased from 10 °C to 12 °C, providing more opportunities for reductions of pesticide usage. We propose a dynamic operational decision threshold between four and 11 effective blight hours (EBH) set according to frequency of the disease outbreaks in the region of interest. Although the risk estimation according to the new model calibrations is higher, estimated chemical inputs, on average, are lower than the usual grower’s practice. Importantly, the research outlined here provides a robust and reproducible methodological approach to evaluate a semi-empirical plant disease forecasting model.