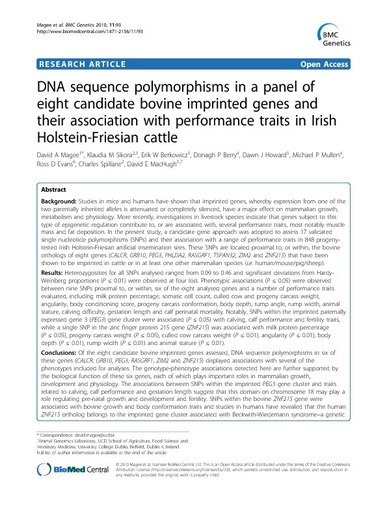 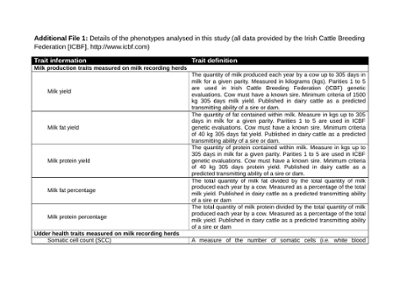 Background: Studies in mice and humans have shown that imprinted genes, whereby expression from one of the two parentally inherited alleles is attenuated or completely silenced, have a major effect on mammalian growth, metabolism and physiology. More recently, investigations in livestock species indicate that genes subject to this type of epigenetic regulation contribute to, or are associated with, several performance traits, most notably muscle mass and fat deposition. In the present study, a candidate gene approach was adopted to assess 17 validated single nucleotide polymorphisms (SNPs) and their association with a range of performance traits in 848 progeny-tested Irish Holstein-Friesian artificial insemination sires. These SNPs are located proximal to, or within, the bovine orthologs of eight genes (CALCR, GRB10, PEG3, PHLDA2, RASGRF1, TSPAN32, ZIM2 and ZNF215) that have been shown to be imprinted in cattle or in at least one other mammalian species (i.e. human/mouse/pig/sheep). Results: Heterozygosities for all SNPs analysed ranged from 0.09 to 0.46 and significant deviations from Hardy-Weinberg proportions (P ≤ 0.01) were observed at four loci. Phenotypic associations (P ≤ 0.05) were observed between nine SNPs proximal to, or within, six of the eight analysed genes and a number of performance traits evaluated, including milk protein percentage, somatic cell count, culled cow and progeny carcass weight, angularity, body conditioning score, progeny carcass conformation, body depth, rump angle, rump width, animal stature, calving difficulty, gestation length and calf perinatal mortality. Notably, SNPs within the imprinted paternally expressed gene 3 (PEG3) gene cluster were associated (P ≤ 0.05) with calving, calf performance and fertility traits, while a single SNP in the zinc finger protein 215 gene (ZNF215) was associated with milk protein percentage (P ≤ 0.05), progeny carcass weight (P ≤ 0.05), culled cow carcass weight (P ≤ 0.01), angularity (P ≤ 0.01), body depth (P ≤ 0.01), rump width (P ≤ 0.01) and animal stature (P ≤ 0.01). Conclusions: Of the eight candidate bovine imprinted genes assessed, DNA sequence polymorphisms in six of these genes (CALCR, GRB10, PEG3, RASGRF1, ZIM2 and ZNF215) displayed associations with several of the phenotypes included for analyses. The genotype-phenotype associations detected here are further supported by the biological function of these six genes, each of which plays important roles in mammalian growth, development and physiology. The associations between SNPs within the imprinted PEG3 gene cluster and traits related to calving, calf performance and gestation length suggest that this domain on chromosome 18 may play a role regulating pre-natal growth and development and fertility. SNPs within the bovine ZNF215 gene were associated with bovine growth and body conformation traits and studies in humans have revealed that the human ZNF215 ortholog belongs to the imprinted gene cluster associated with Beckwith-Wiedemann syndrome--a genetic disorder characterised by growth abnormalities. Similarly, the data presented here suggest that the ZNF215 gene may have an important role in regulating bovine growth. Collectively, our results support previous work showing that (candidate) imprinted genes/loci contribute to heritable variation in bovine performance traits and suggest that DNA sequence polymorphisms within these genes/loci represents an important reservoir of genomic markers for future genetic improvement of dairy and beef cattle populations.