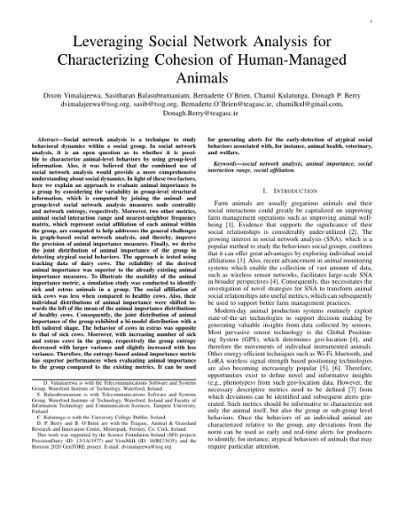 Social network analysis (SNA) is a technique to study behavioral dynamics within a social group. In SNA, it is an open question whether it is possible to characterize animal-level behaviors by using group-level information. Also, it was believed that the combined use of SNA would provide a more comprehensive understanding of social dynamics. In light of these two factors, here we explain an approach to evaluate animal importance to a group by considering the variability in group-level structural information, which is computed by joining the animal- and group-level SNA measures node centrality and network entropy, respectively. Moreover, two other metrics, animal social interaction range and nearest-neighbor frequency matrix, which represent a social affiliation of each animal within the group, are computed to help address the general challenges in graph-based SNA and, thereby, improve the precision of animal importance measures. Finally, we derive the joint distribution of animal importance of the group in detecting atypical social behaviors. The approach is tested using tracking data of dairy cows. The reliability of the derived animal importance was superior to the already existing animal importance measures. To illustrate the usability of the animal importance metric, a simulation study was conducted to identify sick and estrus animals in a group. The social affiliation of sick cows was less when compared to healthy cows. Also, their individual distributions of animal importance were shifted toward the left of the mean of the animal importance distributions of healthy cows. Consequently, the joint distribution of animal importance of the group exhibited a bimodal distribution with a left tailored shape. The behavior of cows in estrus was opposite to that of sick cows. Moreover, with the increasing number of sick and estrus cows in the group, respectively, the group entropy decreased with larger variance and slightly increased with less variance. Therefore, the entropy-based animal importance metric has superior performances when evaluating animal importance to the group compared to the existing metrics. It can be used for generating alerts for the early detection of atypical social behaviors associated with, for instance, animal health, veterinary, and welfare.