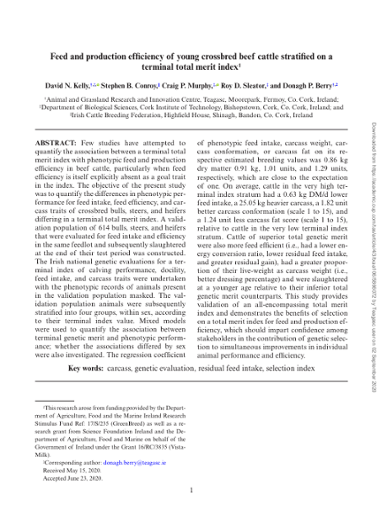 Few studies have attempted to quantify the association between a terminal total merit index with phenotypic feed and production efficiency in beef cattle, particularly when feed efficiency is itself explicitly absent as a goal trait in the index. The objective of the present study was to quantify the differences in phenotypic performance for feed intake, feed efficiency, and carcass traits of crossbred bulls, steers, and heifers differing in a terminal total merit index. A validation population of 614 bulls, steers, and heifers that were evaluated for feed intake and efficiency in the same feedlot and subsequently slaughtered at the end of their test period was constructed. The Irish national genetic evaluations for a terminal index of calving performance, docility, feed intake, and carcass traits were undertaken with the phenotypic records of animals present in the validation population masked. The validation population animals were subsequently stratified into four groups, within sex, according to their terminal index value. Mixed models were used to quantify the association between terminal genetic merit and phenotypic performance; whether the associations differed by sex were also investigated. The regression coefficient of phenotypic feed intake, carcass weight, carcass conformation, or carcass fat on its respective estimated breeding values was 0.86 kg dry matter 0.91 kg, 1.01 units, and 1.29 units, respectively, which are close to the expectation of one. On average, cattle in the very high terminal index stratum had a 0.63 kg DM/d lower feed intake, a 25.05 kg heavier carcass, a 1.82 unit better carcass conformation (scale 1 to 15), and a 1.24 unit less carcass fat score (scale 1 to 15), relative to cattle in the very low terminal index stratum. Cattle of superior total genetic merit were also more feed efficient (i.e., had a lower energy conversion ratio, lower residual feed intake, and greater residual gain), had a greater proportion of their live-weight as carcass weight (i.e., better dressing percentage) and were slaughtered at a younger age relative to their inferior total genetic merit counterparts. This study provides validation of an all-encompassing total merit index and demonstrates the benefits of selection on a total merit index for feed and production efficiency, which should impart confidence among stakeholders in the contribution of genetic selection to simultaneous improvements in individual animal performance and efficiency.