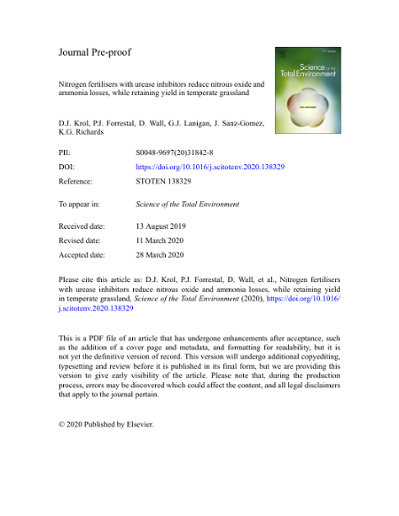 Nitrogen fertilisation, although a cornerstone of modern agricultural production, negatively impacts the environment through gaseous losses of nitrous oxide (N2O), a potent greenhouse gas (GHG), and ammonia (NH3), a known air pollutant. The aim of this work was to assess the feasibility of urea treated with urease inhibitors to reduce gaseous N losses in temperate grassland, while maintaining or improving productivity compared to conventional fertiliser formulations. Urease inhibitors were N-(n-butyl)-thiophosphoric triamide (NBPT) (urea + NBPT) and N-(n-propyl)-thiophosphoric triamide (NPPT) (urea+ NBPT + NPPT), while conventional fertilisers were urea and calcium ammonium nitrate (CAN). N2O emission factors were 0.06%, 0.07%, 0.09% and 0.58% from urea + NBPT, urea, urea + NBPT + NPPT and CAN, respectively, with CAN significantly higher than all the urea formulations, which were not significantly different from each other. Ammonia loss measured over one fertiliser application was significantly larger from urea, at 43%, compared with other formulations at 13.9%, 13.8% and 5.2% from urea + NBPT, urea + NBPT + NPPT and CAN, respectively. Changing fertiliser formulation had no significant impact on grass yield or N uptake in four out of five harvests. In the last harvest urea + NBPT significantly out-yielded urea, but not CAN or urea + NBPT + NPPT. Overall, urea treated with either one or both urease inhibitors significantly reduced emissions of N2O and NH3, while preserving yield quantity and quality. Therefore, changing fertiliser formulation to these products should be encouraged as a strategy to reduce GHG and air pollution from agricultural practices in temperate climate.