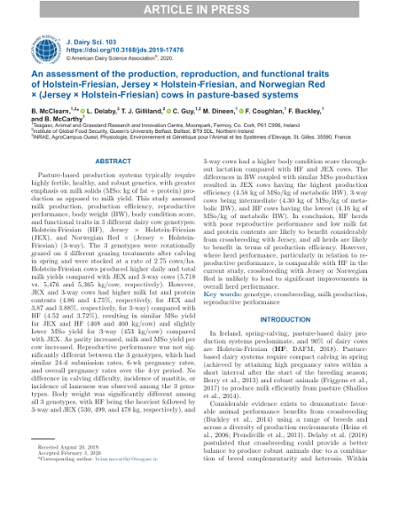 Pasture-based production systems typically require highly fertile, healthy, and robust genetics, with greater emphasis on milk solids (MSo; kg of fat + protein) production as opposed to milk yield. This study assessed milk production, production efficiency, reproductive performance, body weight (BW), body condition score, and functional traits in 3 different dairy cow genotypes: Holstein-Friesian (HF), Jersey × Holstein-Friesian (JEX), and Norwegian Red × (Jersey × Holstein- Friesian) (3-way). The 3 genotypes were rotationally grazed on 4 different grazing treatments after calving in spring and were stocked at a rate of 2.75 cows/ha. Holstein-Friesian cows produced higher daily and total milk yields compared with JEX and 3-way cows (5,718 vs. 5,476 and 5,365 kg/cow, respectively). However, JEX and 3-way cows had higher milk fat and protein contents (4.86 and 4.75%, respectively, for JEX and 3.87 and 3.88%, respectively, for 3-way) compared with HF (4.52 and 3.72%), resulting in similar MSo yield for JEX and HF (469 and 460 kg/cow) and slightly lower MSo yield for 3-way (453 kg/cow) compared with JEX. As parity increased, milk and MSo yield per cow increased. Reproductive performance was not significantly different between the 3 genotypes, which had similar 24-d submission rates, 6-wk pregnancy rates, and overall pregnancy rates over the 4-yr period. No difference in calving difficulty, incidence of mastitis, or incidence of lameness was observed among the 3 genotypes. Body weight was significantly different among all 3 genotypes, with HF being the heaviest followed by 3-way and JEX (530, 499, and 478 kg, respectively), and 3-way cows had a higher body condition score throughout lactation compared with HF and JEX cows. The differences in BW coupled with similar MSo production resulted in JEX cows having the highest production efficiency (4.58 kg of MSo/kg of metabolic BW), 3-way cows being intermediate (4.30 kg of MSo/kg of metabolic BW), and HF cows having the lowest (4.16 kg of MSo/kg of metabolic BW). In conclusion, HF herds with poor reproductive performance and low milk fat and protein contents are likely to benefit considerably from crossbreeding with Jersey, and all herds are likely to benefit in terms of production efficiency. However, where herd performance, particularly in relation to reproductive performance, is comparable with HF in the current study, crossbreeding with Jersey or Norwegian Red is unlikely to lead to significant improvements in overall herd performance.