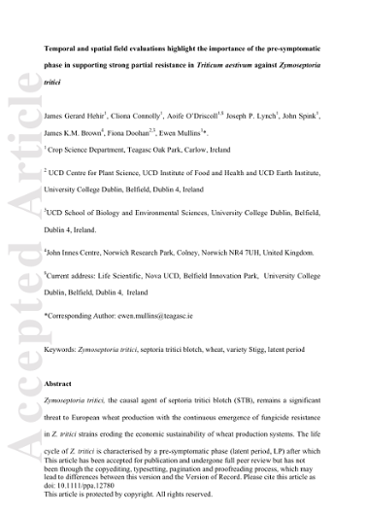 Zymoseptoria tritici, the causal agent of septoria tritici blotch (STB), remains a significant threat to European wheat production with the continuous emergence of fungicide resistance in Z. tritici strains eroding the economic sustainability of wheat production systems. The life cycle of Z. tritici is characterized by a presymptomatic phase (latent period, LP) after which the pathogen switches to an aggressive necrotrophic stage, when lesions bearing pycnidia quickly manifest on the leaf. As minimal knowledge of the possible role of the LP in supporting STB resistance/susceptibility exists, the goal of this study was to investigate the spatial and temporal association between the LP and disease progression across three locations (Ireland – Waterford, Carlow; UK – Norwich) that represent commercially high, medium and low STB pressure environments. Completed over two seasons (2013–2015) with commercially grown cultivars, the potential of the LP in stalling STB epidemics was significant as identified with cv. Stigg, whose high level of partial resistance was characterized by a lengthened LP (c. 36 days) under the high disease pressure environment of Waterford. However, once the LP concluded it was followed by a rate of disease progression in cv. Stigg that was comparable to that observed in the more susceptible commercial varieties. Complementary analysis, via logistic modelling of intensive disease assessments made at Carlow and Waterford in 2015, further highlighted the value of a lengthened LP in supporting strong partial resistance against STB disease of wheat.