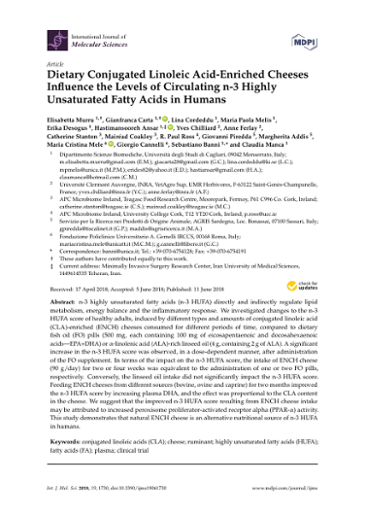 n-3 highly unsaturated fatty acids (n-3 HUFA) directly and indirectly regulate lipid metabolism, energy balance and the inflammatory response. We investigated changes to the n-3 HUFA score of healthy adults, induced by different types and amounts of conjugated linoleic acid (CLA)-enriched (ENCH) cheeses consumed for different periods of time, compared to dietary fish oil (FO) pills (500 mg, each containing 100 mg of eicosapentaenoic and docosahexaenoic acids—EPA+DHA) or α-linolenic acid (ALA)-rich linseed oil (4 g, containing 2 g of ALA). A significant increase in the n-3 HUFA score was observed, in a dose-dependent manner, after administration of the FO supplement. In terms of the impact on the n-3 HUFA score, the intake of ENCH cheese (90 g/day) for two or four weeks was equivalent to the administration of one or two FO pills, respectively. Conversely, the linseed oil intake did not significantly impact the n-3 HUFA score. Feeding ENCH cheeses from different sources (bovine, ovine and caprine) for two months improved the n-3 HUFA score by increasing plasma DHA, and the effect was proportional to the CLA content in the cheese. We suggest that the improved n-3 HUFA score resulting from ENCH cheese intake may be attributed to increased peroxisome proliferator-activated receptor alpha (PPAR-α) activity. This study demonstrates that natural ENCH cheese is an alternative nutritional source of n-3 HUFA in humans.