Effect of split marketing on the welfare, performance, and carcass traits of finishing pigs 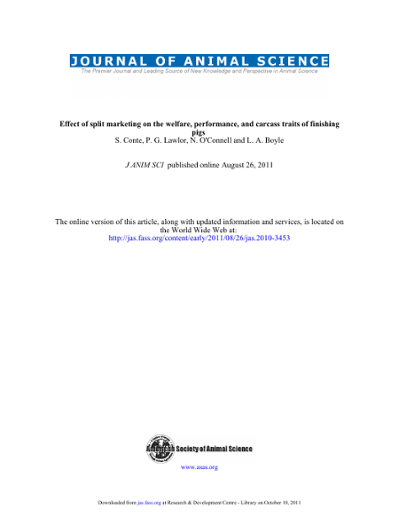 The aim of this study was to compare a split marketing (SM) strategy, in which the heaviest pigs in a group are removed and slaughtered earlier than the others, with an all-out (AO) marketing strategy, in which all pigs are removed from the pen simultaneously and slaughtered on the same day, in terms of welfare, performance, and carcass traits of noncastrated (i.e., intact) male and female pigs. The experimental treatments were arranged in a 2 × 2 factorial array with 1) marketing strategy (SM vs. AO) and 2) sex (males vs. females), which yielded 4 treatment groups of 14 pigs (73.1 ± 4.8 kg): male SM, male AO, female SM, and female AO (7 replicates/group). Pigs in AO groups were all slaughtered after 6 wk on trial, whereas in SM groups the 3 heaviest pigs were removed and slaughtered 2 wk before the remainder of the group, which were slaughtered at the same time as the AO pigs. Pigs were fed a liquid diet from a long trough 3 times daily. Behavioral observations were conducted before and after SM, the day of SM, and 1 and 2 wk later. Behavior was recorded both during and between feed events, and skin lesions were scored on all, except the 3 pigs removed from SM groups before and 2 wk after SM. Growth performance, feed efficiency, and carcass traits were recorded. The number of aggressive interactions during feed events decreased after the 3 pigs were removed from SM groups. This reduction in aggressive interactions was observed on the day of SM in male groups (before SM: 24.3 vs. the day of SM: 14.7, SED = 3.31, P < 0.05 for interaction) and in subsequent observations in female groups (before SM: 21.4 vs. days after SM: 13.4, SED = 3.31, P < 0.05 for interaction). However, SM had no effect on behaviors recorded between feed events or on the number and severity of skin lesions (P > 0.10). There were no differences between the 11 remaining pigs in SM groups and the 14 pigs in AO groups in terms of growth performance, feed efficiency, and carcass traits of female or intact male pigs (P > 0.10). However, reduced within-pen CV in carcass weight was detected in pigs from SM groups compared with pigs from AO groups (8.6 vs. 10.9, SEM = 0.72, P < 0.05). Therefore, in restrictively fed pigs, a SM strategy improved the welfare of both female and intact male pigs by reducing aggressive interactions during feeding but had no effect on performance or carcass traits.