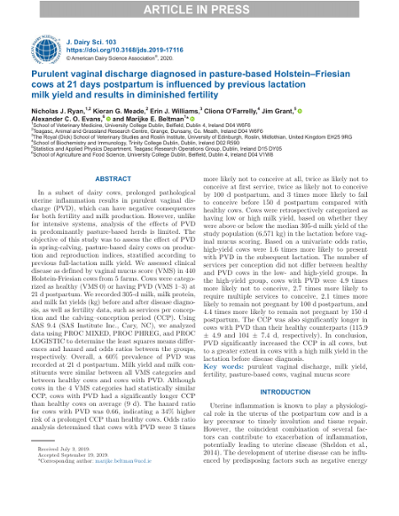 In a subset of dairy cows, prolonged pathological uterine inflammation results in purulent vaginal discharge (PVD), which can have negative consequences for both fertility and milk production. However, unlike for intensive systems, analysis of the effects of PVD in predominantly pasture-based herds is limited. The objective of this study was to assess the effect of PVD in spring-calving, pasture-based dairy cows on production and reproduction indices, stratified according to previous full-lactation milk yield. We assessed clinical disease as defined by vaginal mucus score (VMS) in 440 Holstein-Friesian cows from 5 farms. Cows were categorized as healthy (VMS 0) or having PVD (VMS 1–3) at 21 d postpartum. We recorded 305-d milk, milk protein, and milk fat yields (kg) before and after disease diagnosis, as well as fertility data, such as services per conception and the calving–conception period (CCP). Using SAS 9.4 (SAS Institute Inc., Cary, NC), we analyzed data using PROC MIXED, PROC PHREG, and PROC LOGISTIC to determine the least squares means differences and hazard and odds ratios between the groups, respectively. Overall, a 60% prevalence of PVD was recorded at 21 d postpartum. Milk yield and milk constituents were similar between all VMS categories and between healthy cows and cows with PVD. Although cows in the 4 VMS categories had statistically similar CCP, cows with PVD had a significantly longer CCP than healthy cows on average (9 d). The hazard ratio for cows with PVD was 0.66, indicating a 34% higher risk of a prolonged CCP than healthy cows. Odds ratio analysis determined that cows with PVD were 3 times more likely not to conceive at all, twice as likely not to conceive at first service, twice as likely not to conceive by 100 d postpartum, and 3 times more likely to fail to conceive before 150 d postpartum compared with healthy cows. Cows were retrospectively categorized as having low or high milk yield, based on whether they were above or below the median 305-d milk yield of the study population (6,571 kg) in the lactation before vaginal mucus scoring. Based on a univariate odds ratio, high-yield cows were 1.6 times more likely to present with PVD in the subsequent lactation. The number of services per conception did not differ between healthy and PVD cows in the low- and high-yield groups. In the high-yield group, cows with PVD were 4.9 times more likely not to conceive, 2.7 times more likely to require multiple services to conceive, 2.1 times more likely to remain not pregnant by 100 d postpartum, and 4.4 times more likely to remain not pregnant by 150 d postpartum. The CCP was also significantly longer in cows with PVD than their healthy counterparts (115.9 ± 4.9 and 104 ± 7.4 d, respectively). In conclusion, PVD significantly increased the CCP in all cows, but to a greater extent in cows with a high milk yield in the lactation before disease diagnosis.