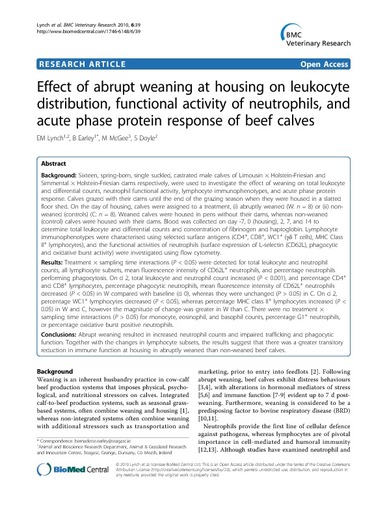 Background: Sixteen, spring-born, single suckled, castrated male calves of Limousin × Holstein-Friesian and Simmental × Holstein-Friesian dams respectively, were used to investigate the effect of weaning on total leukocyte and differential counts, neutrophil functional activity, lymphocyte immunophenotypes, and acute phase protein response. Calves grazed with their dams until the end of the grazing season when they were housed in a slatted floor shed. On the day of housing, calves were assigned to a treatment, (i) abruptly weaned (W: n = 8) or (ii) non-weaned (controls) (C: n = 8). Weaned calves were housed in pens without their dams, whereas non-weaned (control) calves were housed with their dams. Blood was collected on day -7, 0 (housing), 2, 7, and 14 to determine total leukocyte and differential counts and concentration of fibrinogen and haptoglobin. Lymphocyte immunophenotypes were characterised using selected surface antigens (CD4+, CD8+, WC1+ (γδ T cells), MHC Class II+ lymphocytes), and the functional activities of neutrophils (surface expression of L-selectin (CD62L), phagocytic and oxidative burst activity) were investigated using flow cytometry. Results: Treatment × sampling time interactions (P < 0.05) were detected for total leukocyte and neutrophil counts, all lymphocyte subsets, mean fluorescence intensity of CD62L+ neutrophils, and percentage neutrophils performing phagocytosis. On d 2, total leukocyte and neutrophil count increased (P < 0.001), and percentage CD4+ and CD8+ lymphocytes, percentage phagocytic neutrophils, mean fluorescence intensity of CD62L+ neutrophils decreased (P < 0.05) in W compared with baseline (d 0), whereas they were unchanged (P > 0.05) in C. On d 2, percentage WC1+ lymphocytes decreased (P < 0.05), whereas percentage MHC class II+ lymphocytes increased (P < 0.05) in W and C, however the magnitude of change was greater in W than C. There were no treatment × sampling time interactions (P > 0.05) for monocyte, eosinophil, and basophil counts, percentage G1+ neutrophils, or percentage oxidative burst positive neutrophils. Conclusions: Abrupt weaning resulted in increased neutrophil counts and impaired trafficking and phagocytic function. Together with the changes in lymphocyte subsets, the results suggest that there was a greater transitory reduction in immune function at housing in abruptly weaned than non-weaned beef calves.