Increasing importance of anthelmintic resistance in European livestock: creation and meta-analysis of an open database 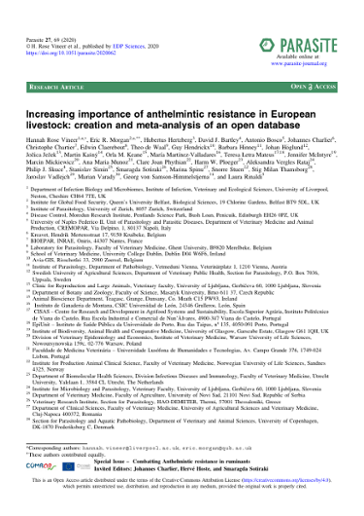 Helminth infections are ubiquitous in grazing ruminant production systems, and are responsible for significant costs and production losses. Anthelmintic Resistance (AR) in parasites is now widespread throughout Europe, although there are still gaps in our knowledge in some regions and countries. AR is a major threat to the sustainability of modern ruminant livestock production, resulting in reduced productivity, compromised animal health and welfare, and increased greenhouse gas emissions through increased parasitism and farm inputs. A better understanding of the extent of AR in Europe is needed to develop and advocate more sustainable parasite control approaches. A database of European published and unpublished AR research on gastrointestinal nematodes (GIN) and liver fluke (Fasciola hepatica) was collated by members of the European COST Action “COMBAR” (Combatting Anthelmintic Resistance in Ruminants), and combined with data from a previous systematic review of AR in GIN. A total of 197 publications on AR in GIN were available for analysis, representing 535 studies in 22 countries and spanning the period 1980–2020. Reports of AR were present throughout the European continent and some reports indicated high within-country prevalence. Heuristic sample size-weighted estimates of European AR prevalence over the whole study period, stratified by anthelmintic class, varied between 0 and 48%. Estimated regional (country) prevalence was highly heterogeneous, ranging between 0% and 100% depending on livestock sector and anthelmintic class, and generally increased with increasing research effort in a country. In the few countries with adequate longitudinal data, there was a tendency towards increasing AR over time for all anthelmintic classes in GIN: aggregated results in sheep and goats since 2010 reveal an average prevalence of resistance to benzimidazoles (BZ) of 86%, macrocyclic lactones except moxidectin (ML) 52%, levamisole (LEV) 48%, and moxidectin (MOX) 21%. All major GIN genera survived treatment in various studies. In cattle, prevalence of AR varied between anthelmintic classes from 0–100% (BZ and ML), 0–17% (LEV) and 0–73% (MOX), and both Cooperia and Ostertagia survived treatment. Suspected AR in F. hepatica was reported in 21 studies spanning 6 countries. For GIN and particularly F. hepatica, there was a bias towards preferential sampling of individual farms with suspected AR, and research effort was biased towards Western Europe and particularly the United Kingdom. Ongoing capture of future results in the live database, efforts to avoid bias in farm recruitment, more accurate tests for AR, and stronger appreciation of the importance of AR among the agricultural industry and policy makers, will support more sophisticated analyses of factors contributing to AR and effective strategies to slow its spread.