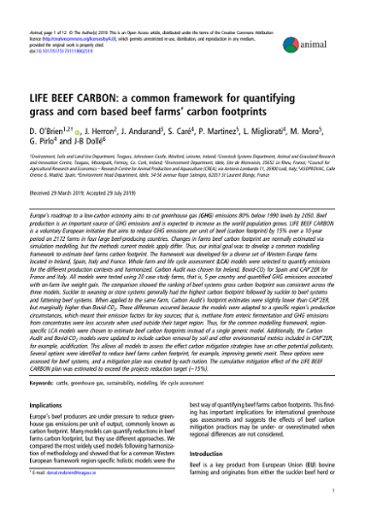 Europe’s roadmap to a low-carbon economy aims to cut greenhouse gas (GHG) emissions 80% below 1990 levels by 2050. Beef production is an important source of GHG emissions and is expected to increase as the world population grows. LIFE BEEF CARBON is a voluntary European initiative that aims to reduce GHG emissions per unit of beef (carbon footprint) by 15% over a 10-year period on 2172 farms in four large beef-producing countries. Changes in farms beef carbon footprint are normally estimated via simulation modelling, but the methods current models apply differ. Thus, our initial goal was to develop a common modelling framework to estimate beef farms carbon footprint. The framework was developed for a diverse set of Western Europe farms located in Ireland, Spain, Italy and France. Whole farm and life cycle assessment (LCA) models were selected to quantify emissions for the different production contexts and harmonized. Carbon Audit was chosen for Ireland, Bovid-CO2 for Spain and CAP’2ER for France and Italy. All models were tested using 20 case study farms, that is, 5 per country and quantified GHG emissions associated with on-farm live weight gain. The comparison showed the ranking of beef systems gross carbon footprint was consistent across the three models. Suckler to weaning or store systems generally had the highest carbon footprint followed by suckler to beef systems and fattening beef systems. When applied to the same farm, Carbon Audit’s footprint estimates were slightly lower than CAP’2ER, but marginally higher than Bovid-CO2. These differences occurred because the models were adapted to a specific region’s production circumstances, which meant their emission factors for key sources; that is, methane from enteric fermentation and GHG emissions from concentrates were less accurate when used outside their target region. Thus, for the common modelling framework, regionspecific LCA models were chosen to estimate beef carbon footprints instead of a single generic model. Additionally, the Carbon Audit and Bovid-CO2 models were updated to include carbon removal by soil and other environmental metrics included in CAP’2ER, for example, acidification. This allows all models to assess the effect carbon mitigation strategies have on other potential pollutants. Several options were identified to reduce beef farms carbon footprint, for example, improving genetic merit. These options were assessed for beef systems, and a mitigation plan was created by each nation. The cumulative mitigation effect of the LIFE BEEF CARBON plan was estimated to exceed the projects reduction target (−15%).