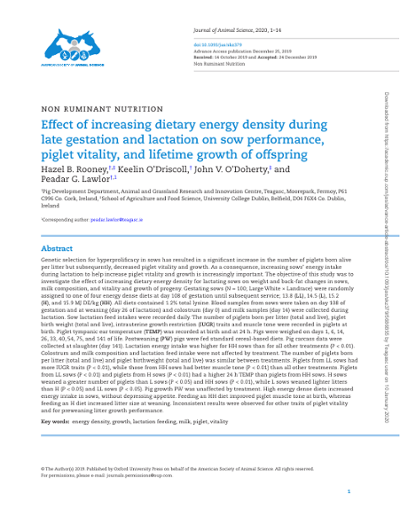 Genetic selection for hyperprolificacy in sows has resulted in a significant increase in the number of piglets born alive per litter but subsequently, decreased piglet vitality and growth. As a consequence, increasing sows’ energy intake during lactation to help increase piglet vitality and growth is increasingly important. The objective of this study was to investigate the effect of increasing dietary energy density for lactating sows on weight and back-fat changes in sows, milk composition, and vitality and growth of progeny. Gestating sows (N = 100; Large White × Landrace) were randomly assigned to one of four energy dense diets at day 108 of gestation until subsequent service; 13.8 (LL), 14.5 (L), 15.2 (H), and 15.9 MJ DE/kg (HH). All diets contained 1.2% total lysine. Blood samples from sows were taken on day 108 of gestation and at weaning (day 26 of lactation) and colostrum (day 0) and milk samples (day 14) were collected during lactation. Sow lactation feed intakes were recorded daily. The number of piglets born per litter (total and live), piglet birth weight (total and live), intrauterine growth restriction (IUGR) traits and muscle tone were recorded in piglets at birth. Piglet tympanic ear temperature (TEMP) was recorded at birth and at 24 h. Pigs were weighed on days 1, 6, 14, 26, 33, 40, 54, 75, and 141 of life. Postweaning (PW) pigs were fed standard cereal-based diets. Pig carcass data were collected at slaughter (day 141). Lactation energy intake was higher for HH sows than for all other treatments (P < 0.01). Colostrum and milk composition and lactation feed intake were not affected by treatment. The number of piglets born per litter (total and live) and piglet birthweight (total and live) was similar between treatments. Piglets from LL sows had more IUGR traits (P < 0.01), while those from HH sows had better muscle tone (P < 0.01) than all other treatments. Piglets from LL sows (P < 0.01) and piglets from H sows (P < 0.01) had a higher 24 h TEMP than piglets from HH sows. H sows weaned a greater number of piglets than L sows (P < 0.05) and HH sows (P < 0.01), while L sows weaned lighter litters than H (P < 0.05) and LL sows (P < 0.05). Pig growth PW was unaffected by treatment. High energy dense diets increased energy intake in sows, without depressing appetite. Feeding an HH diet improved piglet muscle tone at birth, whereas feeding an H diet increased litter size at weaning. Inconsistent results were observed for other traits of piglet vitality and for preweaning litter growth performance.