Genetic and nongenetic factors associated with the fate of maiden ewe lambs: slaughtered without ever lambing versus retained for breeding 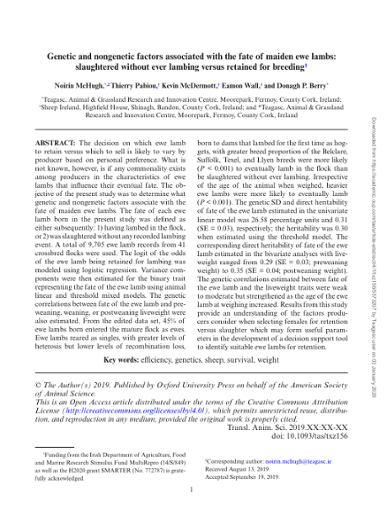 The decision on which ewe lamb to retain versus which to sell is likely to vary by producer based on personal preference. What is not known, however, is if any commonality exists among producers in the characteristics of ewe lambs that influence their eventual fate. The objective of the present study was to determine what genetic and nongenetic factors associate with the fate of maiden ewe lambs. The fate of each ewe lamb born in the present study was defined as either subsequently: 1) having lambed in the flock, or 2) was slaughtered without any recorded lambing event. A total of 9,705 ewe lamb records from 41 crossbred flocks were used. The logit of the odds of the ewe lamb being retained for lambing was modeled using logistic regression. Variance components were then estimated for the binary trait representing the fate of the ewe lamb using animal linear and threshold mixed models. The genetic correlations between fate of the ewe lamb and preweaning, weaning, or postweaning liveweight were also estimated. From the edited data set, 45% of ewe lambs born entered the mature flock as ewes. Ewe lambs reared as singles, with greater levels of heterosis but lower levels of recombination loss, born to dams that lambed for the first time as hoggets, with greater breed proportion of the Belclare, Suffolk, Texel, and Llyen breeds were more likely (P < 0.001) to eventually lamb in the flock than be slaughtered without ever lambing. Irrespective of the age of the animal when weighed, heavier ewe lambs were more likely to eventually lamb (P < 0.001). The genetic SD and direct heritability of fate of the ewe lamb estimated in the univariate linear model was 26.58 percentage units and 0.31 (SE = 0.03), respectively; the heritability was 0.30 when estimated using the threshold model. The corresponding direct heritability of fate of the ewe lamb estimated in the bivariate analyses with liveweight ranged from 0.29 (SE = 0.03; preweaning weight) to 0.35 (SE = 0.04; postweaning weight). The genetic correlations estimated between fate of the ewe lamb and the liveweight traits were weak to moderate but strengthened as the age of the ewe lamb at weighing increased. Results from this study provide an understanding of the factors producers consider when selecting females for retention versus slaughter which may form useful parameters in the development of a decision support tool to identify suitable ewe lambs for retention.

Department of Agriculture, Food and the Marine; European Union