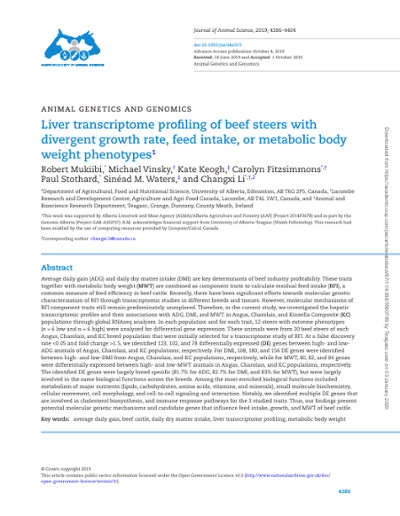 Average daily gain (ADG) and daily dry matter intake (DMI) are key determinants of beef industry profitability. These traits together with metabolic body weight (MWT) are combined as component traits to calculate residual feed intake (RFI), a common measure of feed efficiency in beef cattle. Recently, there have been significant efforts towards molecular genetic characterization of RFI through transcriptomic studies in different breeds and tissues. However, molecular mechanisms of RFI component traits still remain predominately unexplored. Therefore, in the current study, we investigated the hepatic transcriptomic profiles and their associations with ADG, DMI, and MWT in Angus, Charolais, and Kinsella Composite (KC) populations through global RNAseq analyses. In each population and for each trait, 12 steers with extreme phenotypes (n = 6 low and n = 6 high) were analyzed for differential gene expression. These animals were from 20 beef steers of each Angus, Charolais, and KC breed population that were initially selected for a transcriptome study of RFI. At a false discovery rate <0.05 and fold change >1.5, we identified 123, 102, and 78 differentially expressed (DE) genes between high- and lowADG animals of Angus, Charolais, and KC populations, respectively. For DMI, 108, 180, and 156 DE genes were identified between high- and low-DMI from Angus, Charolais, and KC populations, respectively, while for MWT, 80, 82, and 84 genes were differentially expressed between high- and low-MWT animals in Angus, Charolais, and KC populations, respectively. The identified DE genes were largely breed specific (81.7% for ADG, 82.7% for DMI, and 83% for MWT), but were largely involved in the same biological functions across the breeds. Among the most enriched biological functions included metabolism of major nutrients (lipids, carbohydrates, amino acids, vitamins, and minerals), small molecule biochemistry, cellular movement, cell morphology, and cell-to-cell signaling and interaction. Notably, we identified multiple DE genes that are involved in cholesterol biosynthesis, and immune response pathways for the 3 studied traits. Thus, our findings present potential molecular genetic mechanisms and candidate genes that influence feed intake, growth, and MWT of beef cattle.