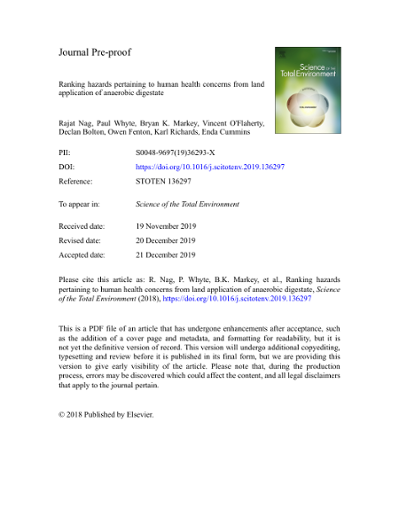 Anaerobic digestion (AD) has been identified as one of the cleanest producers of green energy. AD typically uses organic materials as feedstock and, through a series of biological processes, produces methane. Farmyard manure and slurry (FYM&S) are important AD feedstock and are typically mixed with agricultural waste, grass and/or food wastes. The feedstock may contain many different pathogens which can survive the AD process and hence also possibly be present in the final digestate. In this study, a semi-quantitative screening tool was developed to rank pathogens of potential health concern emerging from AD digestate. A scoring system was used to categorise likely inactivation during AD, hazard pathways and finally, severity as determined from reported human mortality rates, number of global human-deaths and infections per 100,000 populations. Five different conditions including mesophilic and thermophilic AD and three different pasteurisation conditions were assessed in terms of specific pathogen inactivation. In addition, a number of scenarios were assessed to consider foodborne incidence data from Ireland and Europe and to investigate the impact of raw FYM&S application (without AD and pasteurisation). A sensitivity analysis revealed that the score for the mortality rate (S3) was the most sensitive parameter (rank coefficient 0.49) to influence the final score S; followed by thermal inactivation score (S1, 0.25) and potential contamination pathways (S2, 0.16). Across all the scenarios considered, the screening tool prioritised Cryptosporidium parvum, Salmonella spp., norovirus, Streptococcus pyogenes, enteropathogenic E. coli (EPEC), Mycobacterium spp., Salmonella typhi (followed by S. paratyphi), Clostridium spp., Listeria monocytogenes and Campylobacter coli as the highest-ranking pathogens of human health concern resulting from AD digestate in Ireland. This tool prioritises potentially harmful pathogens which can emerge from AD digestate and highlights where regulation and intervention may be required.