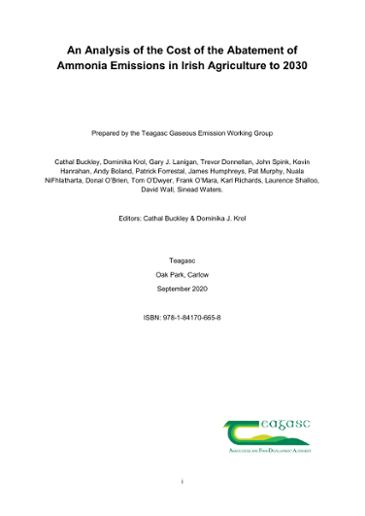 This analysis quantifies the potential to abate national ammonia (NH3) emissions up to 2030. This report is an updated marginal abatement cost curve (MACC) analysis where Teagasc has quantified the abatement potential of a range of ammonia mitigation measures, as well as their associated costs/benefits (see Lanigan et al. 2015 for previous analysis). The objective of this analysis is to quantify the extent and costs associated with meeting future ammonia emission targets that were negotiated as part of the amended Clean Air Policy Package. The requirement to reduce ammonia emissions is urgent, both in terms of compliance with the National Emissions Ceilings Directive (NECD), and as a principal loss pathway for agricultural nitrogen (N). Improvement of N efficiency is a key focus for improving farm efficiency and sustainability as well as reducing the ammonia, nitrate and greenhouse gas (GHG) footprint of agriculture. This is particularly relevant in the context of the national strategies on the development of the agri-food sector: Food Wise 2025, Ag-food strategy 2030 and Ag-Climatise (currently under development) and the newly unveiled EU Farm to Fork Strategy, which is a part of the European Green Deal. Under the baseline scenario (S1), agricultural ammonia emissions are projected to increase by 9% (without any mitigation) by 2030 relative to 2005 levels. While these increases are small in comparison to the targeted increase in agricultural output, they will provide a major challenge to meeting emissions targets, particularly as agriculture comprises over 99% of national emissions. The analysis presented in this report seeks to quantify the ammonia mitigation potential under likely uptake pathways. This is not an exhaustive analysis of all mitigation measures, but represents an assessment of best available techniques, based on scientific, peer-reviewed research carried out by Teagasc and associated national and international research partners. Indeed, any future changes in the sector or in the national emission inventory calculations will require further analysis of the applicability of ammonia mitigation techniques, particularly in terms of housing and storage but also in the context of other reactive N1 emissions. It should also be noted that some mitigation measures, particularly those related to nitrogen application to soils, could result in either higher greenhouse gas emissions or higher nitrate leaching. Compared to a future where no mitigation measures are deployed to address emissions, by 2030 the average technical abatement2 potential was estimated to be approximately 15.26 kt NH3 at a net cost of €10.86 million per annum. However, it should be noted that the net cost (€10.86 million) is comprised of 6 measures that are cost negative (-€22.21 million) and 7 measures that are cost positive (€33.07) and that some of the cost negative measures are predicated on efficiency gains driven by best management practice adoption (e.g. liming and clover measures with associate chemical N reductions). Amongst the thirteen mitigation measures selected for this analysis, 80% of the mitigation potential can be achieved by the full implementation of the mitigation pathways for protected urea and low emission slurry spreading (LESS) techniques for bovines. It should be stressed that this is an assessment of the maximum abatement potential and realising this level of abatement in practice will be extremely challenging. Any increase in agricultural activity beyond the baseline scenario will increase absolute emissions. The level of mitigation achievable is based on the draft AgClimatise measures any delay or reduction in the uptake of these measures will reduce the mitigation achieved. It must also be ensured that all mitigation measures should, where possible, be synergistic with reductions in greenhouse gas emissions and N loss to water.