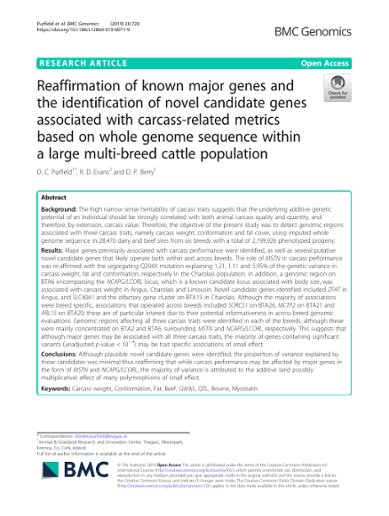 Background: The high narrow sense heritability of carcass traits suggests that the underlying additive genetic potential of an individual should be strongly correlated with both animal carcass quality and quantity, and therefore, by extension, carcass value. Therefore, the objective of the present study was to detect genomic regions associated with three carcass traits, namely carcass weight, conformation and fat cover, using imputed whole genome sequence in 28,470 dairy and beef sires from six breeds with a total of 2,199,926 phenotyped progeny. Results: Major genes previously associated with carcass performance were identified, as well as several putative novel candidate genes that likely operate both within and across breeds. The role of MSTN in carcass performance was re-affirmed with the segregating Q204X mutation explaining 1.21, 1.11 and 5.95% of the genetic variance in carcass weight, fat and conformation, respectively in the Charolais population. In addition, a genomic region on BTA6 encompassing the NCAPG/LCORL locus, which is a known candidate locus associated with body size, was associated with carcass weight in Angus, Charolais and Limousin. Novel candidate genes identified included ZFAT in Angus, and SLC40A1 and the olfactory gene cluster on BTA15 in Charolais. Although the majority of associations were breed specific, associations that operated across breeds included SORCS1 on BTA26, MCTP2 on BTA21 and ARL15 on BTA20; these are of particular interest due to their potential informativeness in across-breed genomic evaluations. Genomic regions affecting all three carcass traits were identified in each of the breeds, although these were mainly concentrated on BTA2 and BTA6, surrounding MSTN and NCAPG/LCORL, respectively. This suggests that although major genes may be associated with all three carcass traits, the majority of genes containing significant variants (unadjusted p-value < 10− 4 ) may be trait specific associations of small effect. Conclusions: Although plausible novel candidate genes were identified, the proportion of variance explained by these candidates was minimal thus reaffirming that while carcass performance may be affected by major genes in the form of MSTN and NCAPG/LCORL, the majority of variance is attributed to the additive (and possibly multiplicative) effect of many polymorphisms of small effect.