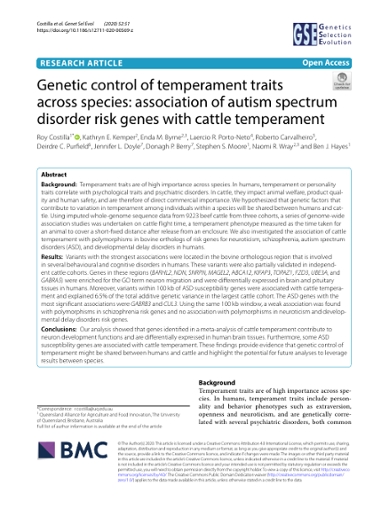 Background Temperament traits are of high importance across species. In humans, temperament or personality traits correlate with psychological traits and psychiatric disorders. In cattle, they impact animal welfare, product quality and human safety, and are therefore of direct commercial importance. We hypothesized that genetic factors that contribute to variation in temperament among individuals within a species will be shared between humans and cattle. Using imputed whole-genome sequence data from 9223 beef cattle from three cohorts, a series of genome-wide association studies was undertaken on cattle flight time, a temperament phenotype measured as the time taken for an animal to cover a short-fixed distance after release from an enclosure. We also investigated the association of cattle temperament with polymorphisms in bovine orthologs of risk genes for neuroticism, schizophrenia, autism spectrum disorders (ASD), and developmental delay disorders in humans. Results Variants with the strongest associations were located in the bovine orthologous region that is involved in several behavioural and cognitive disorders in humans. These variants were also partially validated in independent cattle cohorts. Genes in these regions (BARHL2, NDN, SNRPN, MAGEL2, ABCA12, KIFAP3, TOPAZ1, FZD3, UBE3A, and GABRA5) were enriched for the GO term neuron migration and were differentially expressed in brain and pituitary tissues in humans. Moreover, variants within 100 kb of ASD susceptibility genes were associated with cattle temperament and explained 6.5% of the total additive genetic variance in the largest cattle cohort. The ASD genes with the most significant associations were GABRB3 and CUL3. Using the same 100 kb window, a weak association was found with polymorphisms in schizophrenia risk genes and no association with polymorphisms in neuroticism and developmental delay disorders risk genes. Conclusions Our analysis showed that genes identified in a meta-analysis of cattle temperament contribute to neuron development functions and are differentially expressed in human brain tissues. Furthermore, some ASD susceptibility genes are associated with cattle temperament. These findings provide evidence that genetic control of temperament might be shared between humans and cattle and highlight the potential for future analyses to leverage results between species.