Microbial colonization and resistome dynamics in food processing environments of a newly opened pork cutting industry during 1.5 years of activity 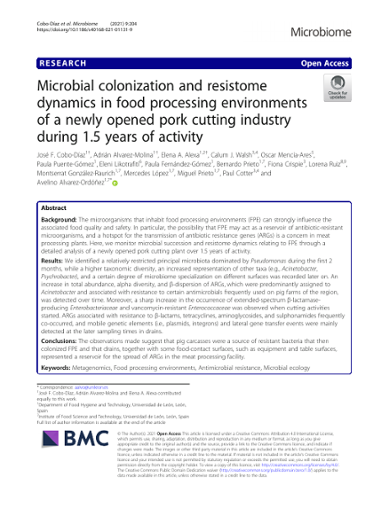 Background The microorganisms that inhabit food processing environments (FPE) can strongly influence the associated food quality and safety. In particular, the possibility that FPE may act as a reservoir of antibiotic-resistant microorganisms, and a hotspot for the transmission of antibiotic resistance genes (ARGs) is a concern in meat processing plants. Here, we monitor microbial succession and resistome dynamics relating to FPE through a detailed analysis of a newly opened pork cutting plant over 1.5 years of activity. Results We identified a relatively restricted principal microbiota dominated by Pseudomonas during the first 2 months, while a higher taxonomic diversity, an increased representation of other taxa (e.g., Acinetobacter, Psychrobacter), and a certain degree of microbiome specialization on different surfaces was recorded later on. An increase in total abundance, alpha diversity, and β-dispersion of ARGs, which were predominantly assigned to Acinetobacter and associated with resistance to certain antimicrobials frequently used on pig farms of the region, was detected over time. Moreover, a sharp increase in the occurrence of extended-spectrum β-lactamase-producing Enterobacteriaceae and vancomycin-resistant Enterococcaceae was observed when cutting activities started. ARGs associated with resistance to β-lactams, tetracyclines, aminoglycosides, and sulphonamides frequently co-occurred, and mobile genetic elements (i.e., plasmids, integrons) and lateral gene transfer events were mainly detected at the later sampling times in drains. Conclusions The observations made suggest that pig carcasses were a source of resistant bacteria that then colonized FPE and that drains, together with some food-contact surfaces, such as equipment and table surfaces, represented a reservoir for the spread of ARGs in the meat processing facility. Video Abstract

Ministry of Science, Innovation and Universities of the Spanish Government; European Union