Antimicrobial resistance in commensal Escherichia coli and Enterococcus spp. is influenced by production system, antimicrobial use, and biosecurity measures on Spanish pig farms 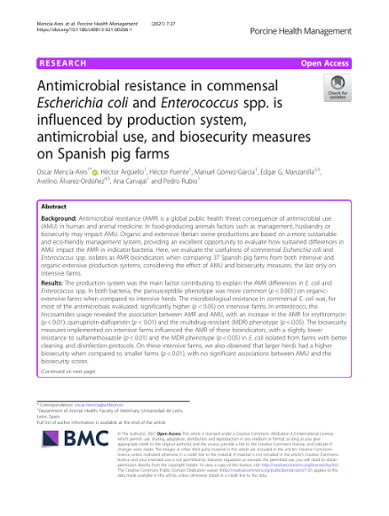 Background Antimicrobial resistance (AMR) is a global public health threat consequence of antimicrobial use (AMU) in human and animal medicine. In food-producing animals factors such as management, husbandry or biosecurity may impact AMU. Organic and extensive Iberian swine productions are based on a more sustainable and eco-friendly management system, providing an excellent opportunity to evaluate how sustained differences in AMU impact the AMR in indicator bacteria. Here, we evaluate the usefulness of commensal Escherichia coli and Enterococcus spp. isolates as AMR bioindicators when comparing 37 Spanish pig farms from both intensive and organic-extensive production systems, considering the effect of AMU and biosecurity measures, the last only on intensive farms. Results The production system was the main factor contributing to explain the AMR differences in E. coli and Enterococcus spp. In both bacteria, the pansusceptible phenotype was more common (p < 0.001) on organic-extensive farms when compared to intensive herds. The microbiological resistance in commensal E. coli was, for most of the antimicrobials evaluated, significantly higher (p < 0.05) on intensive farms. In enterococci, the lincosamides usage revealed the association between AMR and AMU, with an increase in the AMR for erythromycin (p < 0.01), quinupristin-dalfopristin (p < 0.01) and the multidrug-resistant (MDR) phenotype (p < 0.05). The biosecurity measures implemented on intensive farms influenced the AMR of these bioindicators, with a slightly lower resistance to sulfamethoxazole (p < 0.01) and the MDR phenotype (p < 0.05) in E. coli isolated from farms with better cleaning and disinfection protocols. On these intensive farms, we also observed that larger herds had a higher biosecurity when compared to smaller farms (p < 0.01), with no significant associations between AMU and the biosecurity scores. Conclusions Overall, this study evidences that the production system and, to a lesser extent, the biosecurity measures, contribute to the AMR development in commensal E. coli and Enterococcus spp., with antimicrobial usage as the main differential factor, and demonstrates the potential value of these bacteria as bioindicators on pig farms in AMR surveillance programs.