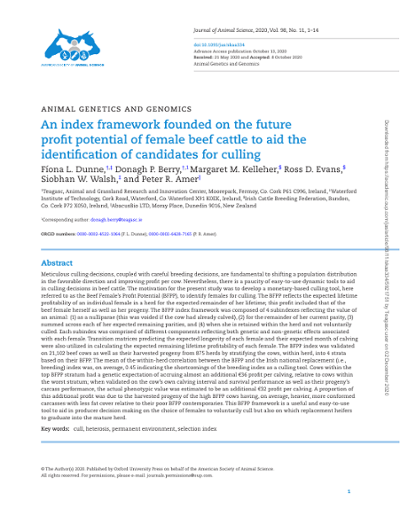 Meticulous culling decisions, coupled with careful breeding decisions, are fundamental to shifting a population distribution in the favorable direction and improving profit per cow. Nevertheless, there is a paucity of easy-to-use dynamic tools to aid in culling decisions in beef cattle. The motivation for the present study was to develop a monetary-based culling tool, here referred to as the Beef Female’s Profit Potential (BFPP), to identify females for culling. The BFPP reflects the expected lifetime profitability of an individual female in a herd for the expected remainder of her lifetime; this profit included that of the beef female herself as well as her progeny. The BFPP index framework was composed of 4 subindexes reflecting the value of an animal: (1) as a nulliparae (this was voided if the cow had already calved), (2) for the remainder of her current parity, (3) summed across each of her expected remaining parities, and (4) when she is retained within the herd and not voluntarily culled. Each subindex was comprised of different components reflecting both genetic and non-genetic effects associated with each female. Transition matrices predicting the expected longevity of each female and their expected month of calving were also utilized in calculating the expected remaining lifetime profitability of each female. The BFPP index was validated on 21,102 beef cows as well as their harvested progeny from 875 herds by stratifying the cows, within herd, into 4 strata based on their BFPP. The mean of the within-herd correlation between the BFPP and the Irish national replacement (i.e., breeding) index was, on average, 0.45 indicating the shortcomings of the breeding index as a culling tool. Cows within the top BFPP stratum had a genetic expectation of accruing almost an additional €36 profit per calving, relative to cows within the worst stratum; when validated on the cow’s own calving interval and survival performance as well as their progeny’s carcass performance, the actual phenotypic value was estimated to be an additional €32 profit per calving. A proportion of this additional profit was due to the harvested progeny of the high BFPP cows having, on average, heavier, more conformed carcasses with less fat cover relative to their poor BFPP contemporaries. This BFPP framework is a useful and easy-to-use tool to aid in producer decision making on the choice of females to voluntarily cull but also on which replacement heifers to graduate into the mature herd.