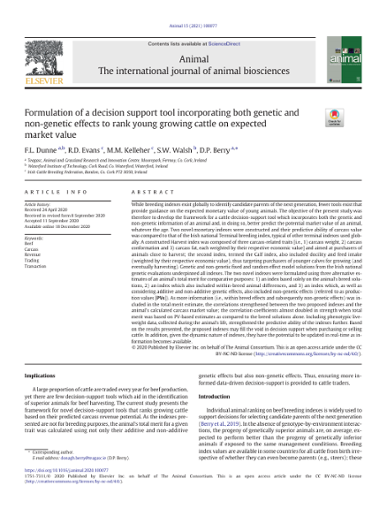 While breeding indexes exist globally to identify candidate parents of the next generation, fewer tools exist that provide guidance on the expected monetary value of young animals. The objective of the present study was therefore to develop the framework for a cattle decision-support tool which incorporates both the genetic and non-genetic information of an animal and, in doing so, better predict the potential market value of an animal, whatever the age. Two novel monetary indexes were constructed and their predictive ability of carcass value was compared to that of the Irish national Terminal breeding index, typical of other terminal indexes used globally. A constructed Harvest index was composed of three carcass-related traits [i.e., 1) carcass weight, 2) carcass conformation and 3) carcass fat, each weighted by their respective economic value] and aimed at purchasers of animals close to harvest; the second index, termed the Calf index, also included docility and feed intake (weighted by their respective economic value), thus targeting purchasers of younger calves for growing (and eventually harvesting). Genetic and non-genetic fixed and random effect model solutions from the Irish national genetic evaluations underpinned all indexes. The two novel indexes were formulated using three alternative estimates of an animal's total merit for comparative purposes: 1) an index based solely on the animal's breed solutions, 2) an index which also included within-breed animal differences, and 3) an index which, as well as considering additive and non-additive genetic effects, also included non-genetic effects (referred to as production values [PVs]). As more information (i.e., within breed effects and subsequently non-genetic effects) was included in the total merit estimate, the correlations strengthened between the two proposed indexes and the animal's calculated carcass market value; the correlation coefficients almost doubled in strength when total merit was based on PV-based estimates as compared to the breed solutions alone. Including phenotypic live-weight data, collected during the animal's life, strengthened the predictive ability of the indexes further. Based on the results presented, the proposed indexes may fill the void in decision support when purchasing or selling cattle. In addition, given the dynamic nature of indexes, they have the potential to be updated in real-time as information becomes available.

Except where otherwise noted, this item's license is described as © 2021 Published by Elsevier B.V. on behalf of The Animal Consortium.