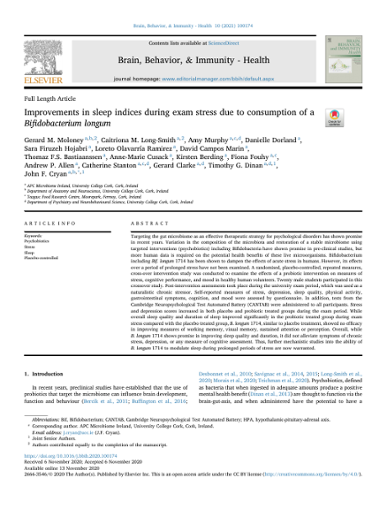 Targeting the gut microbiome as an effective therapeutic strategy for psychological disorders has shown promise in recent years. Variation in the composition of the microbiota and restoration of a stable microbiome using targeted interventions (psychobiotics) including Bifidobacteria have shown promise in pre-clinical studies, but more human data is required on the potential health benefits of these live microorganisms. Bifidobacterium including Bif. longum 1714 has been shown to dampen the effects of acute stress in humans. However, its effects over a period of prolonged stress have not been examined. A randomised, placebo-controlled, repeated measures, cross-over intervention study was conducted to examine the effects of a probiotic intervention on measures of stress, cognitive performance, and mood in healthy human volunteers. Twenty male students participated in this crossover study. Post-intervention assessments took place during the university exam period, which was used as a naturalistic chronic stressor. Self-reported measures of stress, depression, sleep quality, physical activity, gastrointestinal symptoms, cognition, and mood were assessed by questionnaire. In addition, tests from the Cambridge Neuropsychological Test Automated Battery (CANTAB) were administered to all participants. Stress and depression scores increased in both placebo and probiotic treated groups during the exam period. While overall sleep quality and duration of sleep improved significantly in the probiotic treated group during exam stress compared with the placebo treated group, B. longum 1714, similar to placebo treatment, showed no efficacy in improving measures of working memory, visual memory, sustained attention or perception. Overall, while B. longum 1714 shows promise in improving sleep quality and duration, it did not alleviate symptoms of chronic stress, depression, or any measure of cognitive assessment. Thus, further mechanistic studies into the ability of B. longum 1714 to modulate sleep during prolonged periods of stress are now warranted.

Except where otherwise noted, this item's license is described as © 2020 The Author(s). Published by Elsevier Inc.