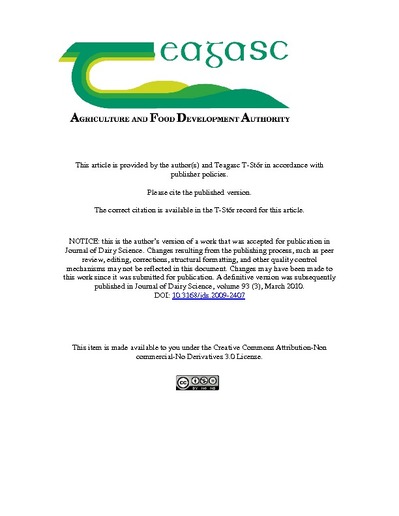 This study was conducted to determine whether extending the calving interval (CI) to 24 mo would be an alternative to culling and replacing cows that had failed to become pregnant. Forty six non-pregnant lactating cows were assembled in Nov 2004 and assigned to receive either 3 kg (low) or 6 kg (high) of concentrate supplement and a basal diet of grass silage and maize silage over the winter period (13 wk). Cows returned to pasture in late March, and received 1 kg concentrate/d until dry-off (milk yield <5 kg/d). Cumulative milk production was calculated from calving to the end of Nov 2004 (12 mo CI), and from the start of Dec 2004 until dry off in 2005 (extended lactation part of 24 mo CI). High winter feeding resulted in greater milk production over the winter confinement (20.0 ± 0.3 vs. 17.8 ± 0.3 kg/d), and had a carryover effect during the remainder of the 24 mo CI period (5,177 vs. 4,686 kg; SEM = 173 kg). At the end of the study, cows were ranked on cumulative milk solids, and separated into 3 groups (R1, R2, and R3). During the 24 mo CI, milk yields were 7,287, 6,267 and 5,273 kg (SEM = 308 kg) in Year 1, and 5,738, 4,836, and 4,266 (SEM = 241 kg) in Year 2 for R1, R2, and R3, respectively. Eighty five percent of the cows became pregnant during the breeding season of yr 2, with a conception rate to first service of 52%. An economic analysis of different Ranks with a 12 mo CI, a 24 mo CI, and an annualized herd effect, which compared an efficient spring calving system with a system that had 30% recycled cows in R1 and 10% recycled cows in R3 was carried out. Farm profit was reduced by 60% and 65% at a milk price of 22.3 c/L with the corresponding values of 17% and 30% for a milk price of 30 c/L, respectively, when R1 and R3 systems were compared with an efficient spring milk (12 mo CI) production system. Within a spring system where 30% and 10% of R1 and R3 animals are subjected to extended lactations, the profit difference was substantially reduced compared to an efficient spring system, The results indicated that lactations with a 24 mo CI may be a viable alternative to culling non-pregnant cows, and economically more suited to higher producing cows.
ae974a485f413a2113503eed53cd6c53
http://dx.doi.org/10.3168/jds.2009-2407