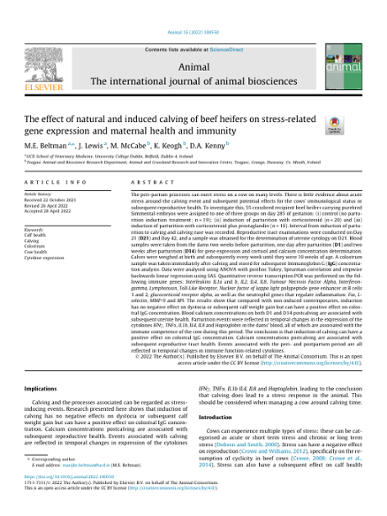 The peri-partum processes can exert stress on a cow on many levels. There is little evidence about acute stress around the calving event and subsequent potential effects for the cows’ immunological status or subsequent reproductive health. To investigate this, 55 crossbred recipient beef heifers carrying purebred Simmental embryos were assigned to one of three groups on day 285 of gestation: (i) control (no parturition induction treatment; n = 19); (ii) induction of parturition with corticosteroid (n = 20) and (iii) induction of parturition with corticosteroid plus prostaglandin (n = 16). Interval from induction of parturition to calving and calving ease was recorded. Reproductive tract examinations were conducted on Day 21 (D21) and Day 42, and a sample was obtained for the determination of uterine cytology on D21. Blood samples were taken from the dams two weeks before parturition, one day after parturition (D1) and two weeks after parturition (D14) for gene expression and cortisol and calcium concentration determination. Calves were weighed at birth and subsequently every week until they were 10 weeks of age. A colostrum sample was taken immediately after calving and stored for subsequent Immunoglobin G (IgG) concentration analysis. Data were analysed using ANOVA with posthoc Tukey, Spearman correlation and stepwise backwards linear regression using SAS. Quantitative reverse transcription PCR was performed on the following immune genes: Interleukins IL1a and b, IL2, IL4, IL8, Tumour Necrosis Factor Alpha, Interferon-gamma, Lymphotoxin, Toll-Like Receptor, Nuclear factor of kappa light polypeptide gene enhancer in B cells 1 and 2, glucocorticoid receptor alpha, as well as the neutrophil genes that regulate inflammation: Fas, L-selectin, MMP-9 and BPI. The results show that compared with non-induced contemporaries, induction has no negative effect on dystocia or subsequent calf weight gain but can have a positive effect on colostral IgG concentration. Blood calcium concentrations on both D1 and D14 postcalving are associated with subsequent uterine health. Parturition events were reflected in temporal changes in the expression of the cytokines IFNγ, TNFα, IL1b, IL4, IL8 and Haptoglobin in the dams’ blood, all of which are associated with the immune competence of the cow during this period. The conclusion is that induction of calving can have a positive effect on colostral IgG concentration. Calcium concentrations postcalving are associated with subsequent reproductive tract health. Events associated with the peri- and postpartum period are all reflected in temporal changes in immune function-related cytokines.

Except where otherwise noted, this item's license is described as © 2022 The Author(s). Published by Elsevier B.V. on behalf of The Animal Consortium.