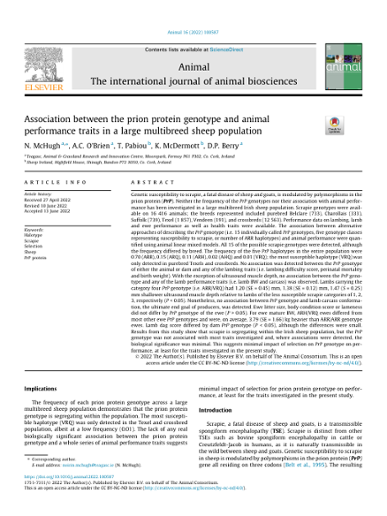 Genetic susceptibility to scrapie, a fatal disease of sheep and goats, is modulated by polymorphisms in the prion protein (PrP). Neither the frequency of the PrP genotypes nor their association with animal performance has been investigated in a large multibreed Irish sheep population. Scrapie genotypes were available on 16 416 animals; the breeds represented included purebred Belclare (733), Charollais (333), Suffolk (739), Texel (1 857), Vendeen (191), and crossbreds (12 563). Performance data on lambing, lamb and ewe performance as well as health traits were available. The association between alternative approaches of describing the PrP genotype (i.e. 15 individually called PrP genotypes, five genotype classes representing susceptibility to scrapie, or number of ARR haplotypes) and animal performance were quantified using animal linear mixed models. All 15 of the possible scrapie genotypes were detected, although the frequency differed by breed. The frequency of the five PrP haplotypes in the entire population were 0.70 (ARR), 0.15 (ARQ), 0.11 (ARH), 0.02 (AHQ) and 0.01 (VRQ); the most susceptible haplotype (VRQ) was only detected in purebred Texels and crossbreds. No association was detected between the PrP genotype of either the animal or dam and any of the lambing traits (i.e. lambing difficulty score, perinatal mortality and birth weight). With the exception of ultrasound muscle depth, no association between the PrP genotype and any of the lamb performance traits (i.e. lamb BW and carcass) was observed. Lambs carrying the category four PrP genotype (i.e. ARR/VRQ) had 1.20 (SE = 0.45) mm, 1.38 (SE = 0.12) mm, 1.47 (S = 0.25) mm shallower ultrasound muscle depth relative to lambs of the less susceptible scrapie categories of 1, 2, 3, respectively (P < 0.05). Nonetheless, no association between PrP genotype and lamb carcass conformation, the ultimate end goal of producers, was detected. Ewe litter size, body condition score or lameness did not differ by PrP genotype of the ewe (P > 0.05). For ewe mature BW, ARH/VRQ ewes differed from most other ewe PrP genotypes and were, on average, 3.79 (SE = 1.66) kg heavier than ARR/ARR genotype ewes. Lamb dag score differed by dam PrP genotype (P < 0.05), although the differences were small. Results from this study show that scrapie is segregating within the Irish sheep population, but the PrP genotype was not associated with most traits investigated and, where associations were detected, the biological significance was minimal. This suggests minimal impact of selection on PrP genotype on performance, at least for the traits investigated in the present study.

Except where otherwise noted, this item's license is described as © 2022 The Author(s). Published by Elsevier B.V. on behalf of The Animal Consortium.