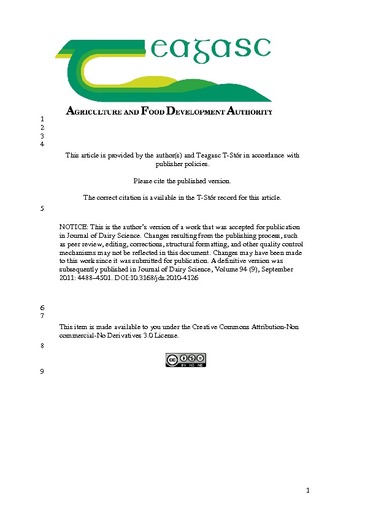 Lactating dairy cows (n = 1,538) were enrolled in a randomized complete block design study to evaluate protocols to synchronize estrus and ovulation. Within each herd (n = 8), cows were divided into 3 calving groups: early, mid, and late, based on days in milk (DIM) at mating start date (MSD). Early calving cows (n = 1,244) were ≥42 DIM at MSD, mid-calving cows (n = 179) were 21 to 41 DIM at MSD, and late-calving cows (n = 115) were 0 to 20 DIM at MSD. Cows in the early, mid-, and late-calving groups were synchronized to facilitate estrus or timed AI (TAI) at MSD (planned breeding 1; PB1), 21 d (PB2), and 42 d (PB3) after MSD, respectively. For each PB, cows in the relevant calving group were stratified by parity and calving date and randomly assigned to 1 of 4 experimental groups: (1) d −10 GnRH (10 μg of i.m. buserelin) and controlled internal drug release insert (CIDR; 1.38 g of progesterone); d −3 PGF2α (25 mg of i.m. dinoprost); and d −2 CIDR out and AI at observed estrus (CIDR_OBS); (2) same as CIDR_OBS, but GnRH 36 h after CIDR out and TAI 18 h later (CIDR_TAI); (3) same as CIDR_TAI, but no CIDR (Ovsynch); or (4) untreated controls (CTRL). The CIDR_OBS, CIDR_TAI, and Ovsynch had shorter mean intervals from calving to first service compared with the CTRL (69.2, 63.4, and 63.7 vs. 73.7 d, respectively). Both CIDR_OBS (predicted probability; PP of pregnancy = 0.59) and CIDR_TAI (PP of pregnancy = 0.54) had increased odds of conceiving at first service compared with Ovsynch [PP of pregnancy = 0.45; odds ratio (OR) = 1.81 and OR = 1.46, respectively], and Ovsynch had decreased likelihood of conceiving at first service (OR = 0.70) compared with CTRL (PP of pregnancy = 0.53). Both CIDR_TAI hazard ratio; HR [95% confidence interval = 1.21 (1.04, 1.41)] and Ovsynch [HR (95% confidence interval) = 1.23 (1.05, 1.44)] were associated with an increased likelihood of earlier conception compared with the CTRL. A greater proportion of cows on the CIDR_TAI treatment successfully established pregnancy in the first 42 d of the breeding season compared with the CTRL (0.75 vs. 0.67 PP of 42-d pregnancy, respectively). Protocols to synchronize estrus and ovulation were effective at achieving earlier first service and conception in pasture-based seasonal calving dairy herds. However, animals that conceived following insemination at observed estrus had a decreased likelihood of embryo loss to first service compared with animals bred with TAI (PP of embryo loss after first service = 0.05 vs. 0.09; OR = 0.52).