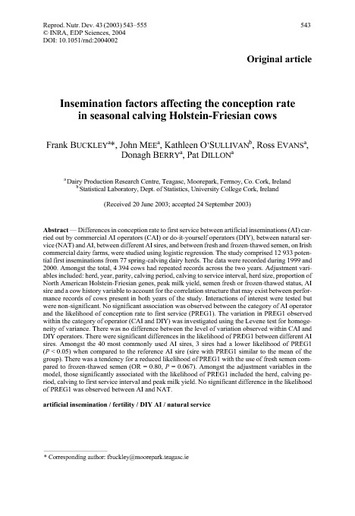 Differences in conception rate to first service between artificial inseminations (AI) carried out by commercial AI operators (CAI) or do-it-yourself operators (DIY), between natural service (NAT) and AI, between different AI sires, and between fresh and frozen-thawed semen, on Irish commercial dairy farms, were studied using logistic regression. The study comprised 12 933 potential first inseminations from 77 spring-calving dairy herds. The data were recorded during 1999 and 2000. Amongst the total, 4 394 cows had repeated records across the two years. Adjustment variables included: herd, year, parity, calving period, calving to service interval, herd size, proportion of North American Holstein-Friesian genes, peak milk yield, semen fresh or frozen-thawed status, AI sire and a cow history variable to account for the correlation structure that may exist between performance records of cows present in both years of the study. Interactions of interest were tested but were non-significant. No significant association was observed between the category of AI operator and the likelihood of conception rate to first service (PREG1). The variation in PREG1 observed within the category of operator (CAI and DIY) was investigated using the Levene test for homogeneity of variance. There was no difference between the level of variation observed within CAI and DIY operators. There were significant differences in the likelihood of PREG1 between different AI sires. Amongst the 40 most commonly used AI sires, 3 sires had a lower likelihood of PREG1 (P < 0.05) when compared to the reference AI sire (sire with PREG1 similar to the mean of the group). There was a tendency for a reduced likelihood of PREG1 with the use of fresh semen compared to frozen-thawed semen ( , P = 0.067). Amongst the adjustment variables in the model, those significantly associated with the likelihood of PREG1 included the herd, calving period, calving to first service interval and peak milk yield. No significant difference in the likelihood of PREG1 was observed between AI and NAT.