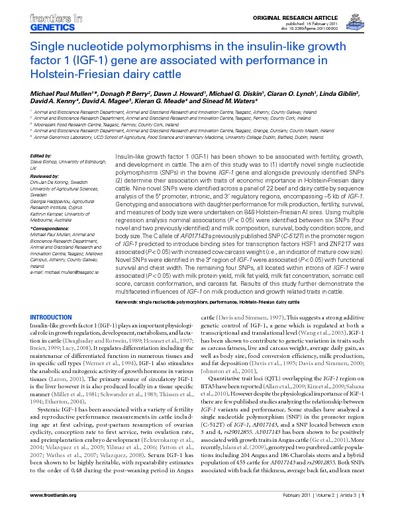 Insulin-like growth factor 1 (IGF-1) has been shown to be associated with fertility, growth, and development in cattle. The aim of this study was to (1) identify novel single nucleotide polymorphisms (SNPs) in the bovine IGF-1 gene and alongside previously identified SNPs (2) determine their association with traits of economic importance in Holstein-Friesian dairy cattle. Nine novel SNPs were identified across a panel of 22 beef and dairy cattle by sequence analysis of the 5′ promoter, intronic, and 3′ regulatory regions, encompassing ∼5 kb of IGF-1. Genotyping and associations with daughter performance for milk production, fertility, survival, and measures of body size were undertaken on 848 Holstein-Friesian AI sires. Using multiple regression analysis nominal associations (P < 0.05) were identified between six SNPs (four novel and two previously identified) and milk composition, survival, body condition score, and body size. The C allele of AF017143 a previously published SNP (C-512T) in the promoter region of IGF-1 predicted to introduce binding sites for transcription factors HSF1 and ZNF217 was associated (P < 0.05) with increased cow carcass weight (i.e., an indicator of mature cow size). Novel SNPs were identified in the 3′ region of IGF-1 were associated (P < 0.05) with functional survival and chest width. The remaining four SNPs, all located within introns of IGF-1 were associated (P < 0.05) with milk protein yield, milk fat yield, milk fat concentration, somatic cell score, carcass conformation, and carcass fat. Results of this study further demonstrate the multifaceted influences of IGF-1 on milk production and growth related traits in cattle.

Science Foundation Ireland; Department of Agriculture, Food and the Marine