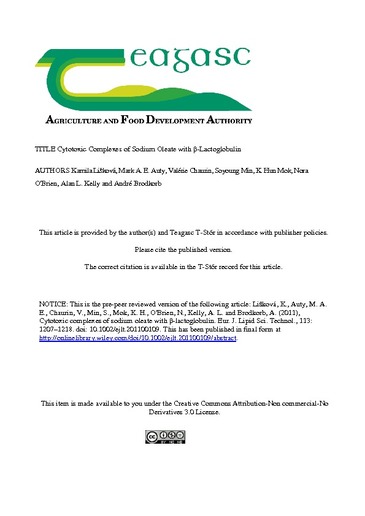 A complex of α-lactalbumin and oleic acid has previously been shown to induce apoptosis in cancer cells in a number of in vitro and in vivo trials. This complex is called HAMLET or BAMLET, depending on the origin of α-la (human/bovine alpha-lactalbumin made lethal to tumour cells). In the current study, it was shown that bovine β-lactoglobulin (β-lg), upon binding sodium oleate (NaOle), the salt of oleic acid, also acquires cytotoxicity towards tumour cells (human monocytic cells U937), analogously to HAMLET/BAMLET complexes. The properties of the complex were characterized using FIR spectroscopy, HPLC and SDS-PAGE. It was shown that the level of covalent oligomerization (dimers and trimers) of β-lg increased with increasing the molar ratio of sodium oleate NaOle:β-lg in the preparation procedure. At the same time, increasing the molar ratio of NaOle:β-lg increased the cytotoxicity of the complex. The increase in cytotoxicity appeared to be dependent on the amount of bound NaOle in the complex, but not on the content of multimeric forms of β-lg. The NaOle/β-lg complex also showed similarity with BAMLET in penetrating the cell membrane and co-localizing with the cell nucleus. Furthermore, DNA fragmentation studies suggested that tumour cells (U937) treated with the complex died by apoptosis, as in the case of BAMLET, and healthy cells appeared to be less affected by treatment, as shown with model rat adrenal pheochromocytoma cells PC12. In conclusion, β-lg and NaOle can form complexes with apoptosis-inducing qualities comparable to those of BAMLET.