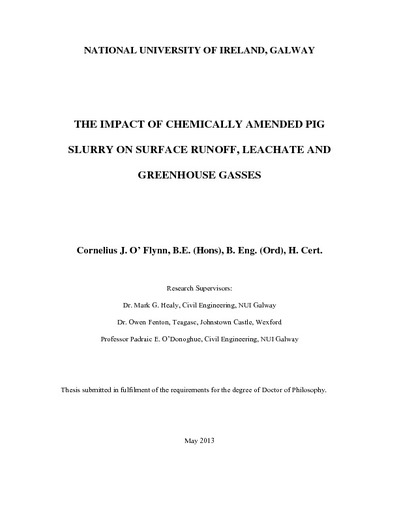 In Ireland, the pig industry is concentrated in a small number of counties. Pig farms typically have a high stocking rate. Therefore, the disposal of slurry in a cost-effective and environmentally-responsible way is a serious issue for farmers. Slurry is commonly applied to land, but this may not be possible if the land is at, or approaching, phosphorus (P) saturation. As pig farmers dispose of slurry in the vicinity of their properties, most of the nearby land is at P saturation, so alternative treatment methods need to be utilised (e.g. constructed wetlands, anaerobic digestion, filtration) or the slurry needs to be transported to another location. These alternatives are not currently financially viable in Ireland. Existing legislation (S.I. 610 of 2010) and recent changes in the implementation of legislation governing the timing and quantities of slurry that may be applied to land, means that pig farmers will no longer be able to exceed the maximum legal application rate to land (from January 2017). European policy aiming to intensify pig production will only accentuate this problem. If pig farmers are forced, in exceptional circumstances, to land apply slurry to unsuitable land, surface and subsurface losses of nutrients and suspended solids (SS) may occur. This could be potentially problematic if the land is located in a critical source area (CSA), an area that is highly likely to pollute receiving waters. In these circumstances, a possible novel solution is to chemically amend the pig slurry prior to landspreading. This would mean that pig farmers may, in exceptional circumstances, utilise the land in the vicinity of their farms for landspreading, without releasing excessive nutrients and SS into receiving waters. However, knowledge gaps exist concerning the type of amendments to be used, the characteristics of the soil on which they can be most effectively used, and their impact on incidental (short-term) and chronic (long-term) losses of nutrients, SS and greenhouse gas (GHG) to surface and subsurface water and the atmosphere. Therefore, the aims of this project were to: (1) identify the most appropriate chemical amendments, and their addition rates, to reduce P losses in runoff from pig slurry based on effectiveness, cost and feasibility; (2) investigate the impacts of these chemical amendments on nutrient losses in leachate, soil properties and GHG emissions; and (3) identify suitable soil types on which to landspread chemically-amended pig slurry. Laboratory bench-scale experiments were designed to identify the amendments which had the potential to reduce P in overland runoff and to quantify the stoichiometric rates at which to add them to the slurry. Based on effectiveness, cost and feasibility, the amendments identified were alum, which reduced dissolved reactive phosphorus (DRP) in overlying water by 86%, poly-aluminium chloride (PAC) (73%) and ferric chloride (FeCl3) (71%). Following these bench-scale experiments, rainfall simulation experiments were conducted to quantify the impact of chemical amendments to slurry on surface runoff losses at various time intervals from the time of application. Poly-aluminium chloride performed best in these experiments. For the first time, the effect of these amendments on GHG emissions, soil properties and leachate was also examined. Chemical amendment did not adversely affect GHG emissions, soil properties or leachate from pig slurry, but FeCl3 increased nitrous oxide (N2O) and carbon dioxide (CO2) losses. Finally, a 3-mo incubation experiment was conducted using a range of soil types to examine the effect of amendments on the long-term plant availability of P in soil and P solubility. Alum reduced more water extractable P than PAC, but also resulted in less plant available P. Considering cost, surface runoff and subsurface leachate losses, GHG emissions and impacts on soil chemistry, PAC was found to be the most suitable amendment with which to chemically amend pig slurry. There is the potential, in combination with existing programmes of measures, to employ chemical amendment as a measure to mitigate the environmental impact arising from the landspreading of pig slurry. This should be conducted in targeted areas of the CSA and should take into account soil type and its chemical properties. Before implementation, these tests must first be validated in long-term testing at field-scale over a wide variety of soil types, and include repeated application and incorporation. At present, there is no provision in legislation for chemical amendments to be used as a mitigation measure in the land application of pig slurry, but if they are to be utilised, a regulatory framework will need to be introduced by the relevant bodies.