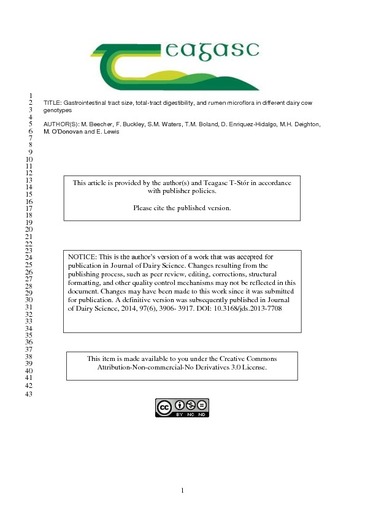 The superior milk production efficiency of Jersey (JE) and Jersey × Holstein-Friesian (JE × HF) cows compared with Holstein-Friesian (HF) has been widely published. The biological differences among dairy cow genotypes, which could contribute to the milk production efficiency differences, have not been as widely studied however. A series of component studies were conducted using cows sourced from a longer-term genotype comparison study (JE, JE × HF, and HF). The objectives were to (1) determine if differences exist among genotypes regarding gastrointestinal tract (GIT) weight, (2) assess and quantify whether the genotypes tested differ in their ability to digest perennial ryegrass, and (3) examine the relative abundance of specific rumen microbial populations potentially relating to feed digestibility. Over 3 yr, the GIT weight was obtained from 33 HF, 35 JE, and 27 JE × HF nonlactating cows postslaughter. During the dry period the cows were offered a perennial ryegrass silage diet at maintenance level. The unadjusted GIT weight was heavier for the HF than for JE and JE × HF. When expressed as a proportion of body weight (BW), JE and JE × HF had a heavier GIT weight than HF. In vivo digestibility was evaluated on 16 each of JE, JE × HF, and HF lactating dairy cows. Cows were individually stalled, allowing for the total collection of feces and were offered freshly cut grass twice daily. During this time, daily milk yield, BW, and dry matter intake (DMI) were greater for HF and JE × HF than for JE; milk fat and protein concentration ranked oppositely. Daily milk solids yield did not differ among the 3 genotypes. Intake capacity, expressed as DMI per BW, tended to be different among treatments, with JE having the greatest DMI per BW, HF the lowest, and JE × HF being intermediate. Production efficiency, expressed as milk solids per DMI, was higher for JE than HF and JE × HF. Digestive efficiency, expressed as digestibility of dry matter, organic matter, N, neutral detergent fiber, and acid detergent fiber, was higher for JE than HF. In grazing cows (n = 15 per genotype) samples of rumen fluid, collected using a transesophageal sampling device, were analyzed to determine the relative abundance of rumen microbial populations of cellulolytic bacteria, protozoa, and fungi. These are critically important for fermentation of feed into short-chain fatty acids. A decrease was observed in the relative abundance of Ruminococcus flavefaciens in the JE rumen compared with HF and JE × HF. We can deduce from this study that the JE genotype has greater digestibility and a different rumen microbial population than HF. Jersey and JE × HF cows had a proportionally greater GIT weight than HF. These differences are likely to contribute to the production efficiency differences among genotypes previously reported.
ae974a485f413a2113503eed53cd6c53
http://dx.doi.org/10.3168/jds.2013-7708