Search
JavaScript is disabled for your browser. Some features of this site may not work without it. 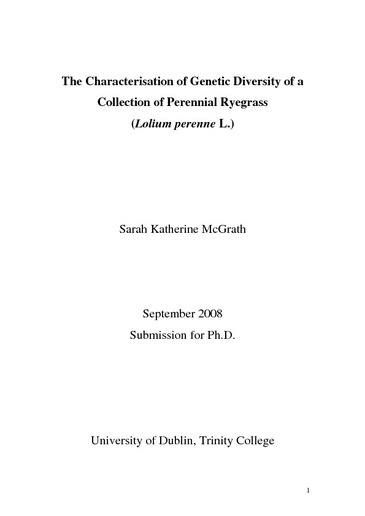 The Characterisation of Genetic Diversity of a Collection of Perennial Ryegrass (Lolium perenne L.).

McGrath, Sarah Katherine (2008)
Perennial ryegrass (Lolium perenne L.) is a member of the Poaceae family, is native to Europe, the Near East and North Africa and is grown in all the temperate climate areas of the world as a forage and turf grass. Due to its persistence, palatability and nutritive value for ruminants, it is a principal component of pastures, and the most important forage species in Ireland. The primary aim of this thesis was to characterise the level of diversity in a large genetic resource collection of L. perenne germplasm held at Teagasc, Oak Park. Molecular markers, both chloroplast and nuclear SSRs, biochemical characters (water soluble carbohydrate, crude protein, and dry matter), and morphological characters (vegetative and flowering) were used to characterise this diversity, as well as population differentiation, and geographic patterns. Levels of diversity in all systems were found to be high in this collection. Primers to amplify microsatellite markers from the chloroplast genome of Lolium perenne were designed and optimized using de novo sequencing and in silico sequences. With one exception, each locus was polymorphic with a range from two to nine alleles in L. perenne. The newly developed primer pairs cross-amplified in different species of Lolium and in 50 other grass species representing nine grass subfamilies. These markers were then used to characterise chloroplast genetic diversity at allelic and haplotypic level in 104 accessions of Lolium perenne, other Lolium species, Festuca species and ´Festulolium cultivars. Furthermore, genetic relationships between the accessions and biogeographic distribution of haplotypes were investigated using a range of population genetic diversity measures and an Analysis of Molecular Variance (AMOVA). An extremely high number of 511 haplotypes was detected in 1,575 individuals possibly attributable to natural and anthropogenic migration. Much of the L. perenne European ecotype diversity (61%) could be attributed to within population variance. Plastid gene pools and maternal lineages for L. perenne could be clearly identified. Evidence was found showing a most likely migration route of L. perenne into Ireland from southern regions of Europe northwards. 5 Morphological variation of 13 vegetative and reproductive traits was characterised for 2,481 individuals from 50 L. perenne accessions, a mixture of Irish and European ecotypes and cultivars. Considerable levels of among and within population variation was found across traits. Principal component analysis and UPGMA dendrograms were able to separate ecotypes from cultivars. Cultivars generally had later dates of ear emergence, better spring and summer growth, longer rachis length and more spikelets per spike than ecotypes. Correlation and regression analysis were used to assess relationships between traits and strong positive relationships were seen between reproductive characters, i.e. rachis length with spikelets per spike, florets per spikelet and glume length. The strong relationship between rachis length and the other reproductive characters suggested that rachis length could be used as a predictor for reproductive performance. Later flowering was correlated with improved spring and summer growth. Water soluble carbohydrate (WSC; glucose and fructose determined by HPLC), crude protein (determined via LECO analysis), and dry matter contents were recorded for 1,320 individuals, pooled into 132 samples from 33 L. perenne ecotypes and cultivars at five different harvest time points across the 2004 growing season. While, in general, the cultivars had higher WSC contents than the ecotypes, individual ecotypes did show potential to be used in breeding programmes, as they showed higher values than all other accessions at particular cutting points. In correlation analyses, positive relationships were shown between dry matter and glucose both early and late in the growing season, and this was in agreement with the amount of leaves compared to stem at these times in the growing season. PCA analysis allowed the separation either between cultivars and ecotypes, or between tetraploid cultivars and the rest of the accessions at four out of five cutting points. In the ANOVA analysis, cutting point was the most significant factor influencing the variation in the traits. Eight nuclear SSR markers were used to characterize genetic diversity in 928 individuals from 40 diploid ecotypes and cultivars of L. perenne. High levels of genetic diversity (0.82, Nei’s gene diversity, over all accessions) and high numbers of alleles (22.25 average number of alleles per locus) was found. An average polymorphic information content (PIC) value of 0.81 across all loci was found. When deviations from Hardy-Weinberg equilibrium were tested, the majority of populations 6 had an excess of homozygotes. Very low levels of linkage disequilibrium were found between pairs of loci tested. AMOVA analysis and F statistics were used to test partitioning of variation, and most variation was found within populations (e.g. 31% for glume length in ecotypes). UPGMA, PCA and STRUCTURE analysis all gave similar patterns of relationships between populations, where relationships with high bootstrap support on the UPGMA dendrogram were also seen in the other analyses. The overall results of the thesis are discussed in the context of plant breeding programmes and natural population genetic variation. Strategies for incorporation of the results of the thesis (and the novel markers developed within) into plant breeding programmes are suggested. 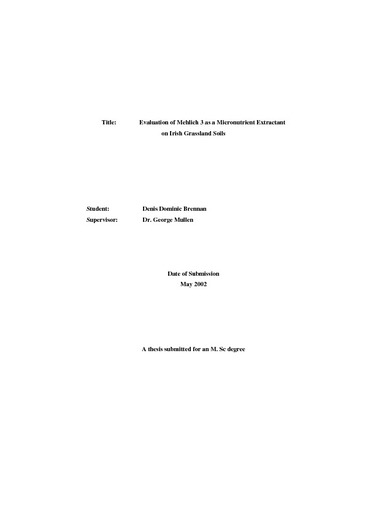 Brennan, Denis D. (2002)
The use of multinutrient extractants has been increasing in recent years, Mehlich 3 (M3) being one that has gained wide acceptance. The objective of this study was to see how M3 compared with methods currently used in Ireland for Cu, Zn, Mn and Fe extraction, and to investigate if it could be used to determine available Mo. Samples from eight mineral soil types, four of sandstone/shale and four of limestone origin and some organic soils were analysed for the micronutrients Cu, Fe, Mn, Mo and Zn using M3 and conventional extractants. Herbage samples were taken from specific mineral soils and analysed for the same range of elements. M3 results showed good correlation with EDTA and DTPA extractable Cu and Zn, and with easily reducible Mn, but poor correlation with DTPA extractable Mn and Fe. It was not possible to measure Mo in the M3 extract. Inclusion of soil properties and interacting elements in multiple regression models improved the coefficients of determination. Different relationships between extractants were displayed for mineral and organic soils. All extractants were equal in their ability to predict micronutrient content of herbage. Differences between sandstone/shale and limestone soils in relation to herbage micronutrient content were also found; the better relationships were generally found on the sandstone/shale. Results are generally in line with published data, but disagree with those of some studies. M3 is subject to the same shortcomings as existing extractants, but it’s versatility and range does offer an advantage. 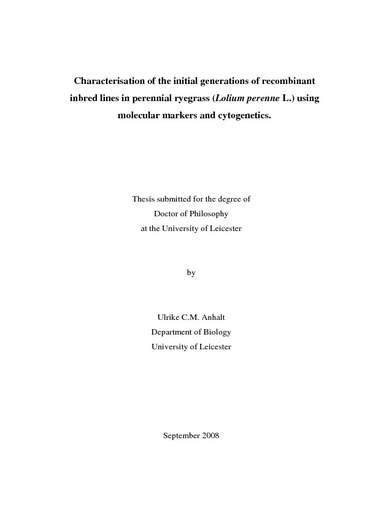 Anhalt, Ulrike C. M. (2009)
In this study three early generations of a recombinant inbred line (RIL) breeding programme have been characterised by cytogenetic methods, metabolite profiling and a biomass quantitative trait loci (QTL) study. In situ hybridization was used to analyse recombination and the structure of the parental and the F1 genomes. A metabolite profiling study via GC/MS was conducted to characterise the metabolite activity of the parental inbred lines and the F1 hybrid. Total metabolites were compared across a growth season in a replicated field design. A genetic map was constructed with 75 nuclear DNA markers in the F2 generation, which consisted of 360 individuals. 63% of the markers in the F2 population did not fit the expected Mendelian ratios and showed significant (p<0.05) segregation distortion. Fresh weight, dry weight, and dry matter were analysed with an alpha lattice design throughout the greenhouse and field experiments. Additionally, leaf width was recorded in the greenhouse experiment. Heritablities ranged for the biomass related traits between 78 and 95%. This study provides an insight into the recombination of the parental and the F1 genotypes. Different levels of metabolite activities could be found among the two parental inbred lines across three harvest dates. The QTL study indicates the position of biomass QTL related traits. Major QTL with log of odds scores >3 were identified on linkage groups 2, 3, 4, 5 and 7. About 30% of overall variation could be explained. Increased biomass yield is still one of the most important traits in any Lolium perenne breeding programme. The present QTL study can be used for fine mapping of biomass yield related traits in L. perenne. In the long term biomass yield can be eventually monitored and predicted with marker assisted selection for some of the QTL identified in the present study. 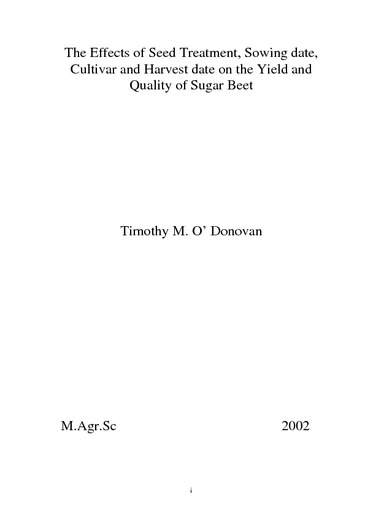 The Effects of Seed Treatment, Sowing date, Cultivar and Harvest date on the Yield and Quality of Sugar Beet

O'Donovan, Timothy (2002)
Trials were carried out at Lyons Estate Research Farm during 1998 on sugar beet (Beta Vulgaris). The commercially available seed treatment ‘Advantage’ was tested across 3 sowing dates, 4 commercially available cultivars and 4 harvest dates. Trials were carried out in a factorial arrangement and subject to standard statistical analysis. Data on emergence, ground cover, yield and quality was analysed. Percentage emergence of seed was satisfactory in all experiments. The benefit of ‘Advantage’ treatment during the emergence stage of growth was clearly seen in all trials. On average ‘Advantage’ seed emerged 2-3 days earlier than untreated seed and reached the target population (>75,000 plants/ha 4 days sooner than the control seed. During the growing season, ground cover was measured until complete cover was reached. In the trials it was less clear as to the benefits of using the treatment ‘Advantage’, as it was seldom statically different from control seed. As yields can be related to the radiation intercepted, it is not surprising that there were not large differences in yields. Delaying sowing date resulted in decreased yields of clean beet, sugar and extractable sugar. The two triploid varieties, Libra and Accord gave better yields of clean beet, sugar and extractable sugar than the two diploid cultivars Zulu and Celt. Delaying harvesting gave increased yields of clean beet, sugar and extractable sugar. The ‘Experimental’ seed treatment was not superior to the ‘Advantage’ treatment. In only one of the experiments was ‘Advantage’ better than the control treatment in respect of yield of clean beet, in the time of harvest trial. This was not reflected in yield of sugar or extractable sugar. In all other situations, there were no differences between ‘Advantage’ and the control treatments. There was no benefit from using ‘Advantage’ seed in the current experiments. However earlier sowing dates require investigation with pre-treated seed.