Differences in leukocyte profile, gene expression, and metabolite status of dairy cows with or without sole ulcers 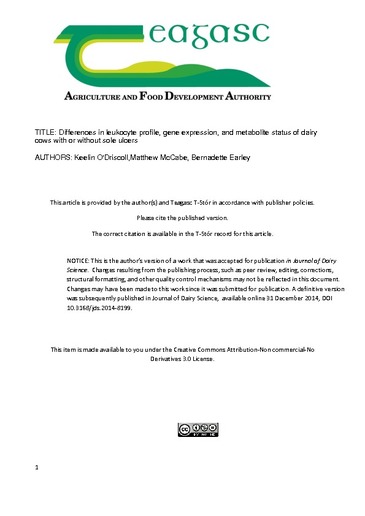 Sole ulcers are one of the most severe pathologies causing lameness in dairy cows and are associated with abnormal behavior and impaired production performance. However, little is known about how or whether lameness caused by sole ulcers affects the cow systemically. This study compared hematology profile, leukocyte gene expression, and physiological responses [metabolite, cortisol, the endogenous steroid hormone dehydroepiandrosterone (DHEA), and haptoglobin concentrations] of cows with sole ulcers and healthy cows. Twelve clinically lame cows (lame) were identified as having at least one sole ulcer and no other disorder, and matched with a cow that had good locomotion and no disorders (sound), using days in milk, liveweight, body condition score, and diet. Blood samples were taken from all 24 cows within 24 h of sole ulcer diagnosis. Leukocyte counts were obtained using an automated cell counter, cortisol and DHEA concentration by ELISA, and plasma haptoglobin, urea, total protein, creatine kinase, and glucose were analyzed on an Olympus analyzer. Expression of 16 genes associated with lameness or stress were estimated using reverse transcription-PCR. Data were analyzed using the MIXED procedure in SAS software (version 9.3; SAS Institute Inc., Cary, NC). Lame cows had a higher neutrophil percentage, a numerically lower lymphocyte percentage, and tended to have a higher neutrophil:lymphocyte ratio than sound cows. Serum cortisol and DHEA concentrations were higher in lame than in sound cows. Lame cows also tended to have higher haptoglobin and glucose levels than sound, as well as higher protein yet lower urea levels. Sound cows tended to have higher relative expression of the gene coding for colony-stimulating factor 2 than lame, but in all other cases where differences were detected in cytokine gene expression (IL-1α, IL-1β, CXCL8, and IL-10), relative gene expression in sound cows tended to be, or was, lower than in lame. Relative expression of MMP-13, GR-α, Fas, haptoglobin, and CD62L were, or tended to be, higher in lame than sound cows. A high neutrophil:lymphocyte ratio in combination with higher cortisol levels in cows with ulcers is indicative of physiological stress. Moreover, increased DHEA and a higher cortisol:DHEA ratio, as well as a tendency for higher haptoglobin levels and increased haptoglobin mRNA expression, are indicative of systemic inflammation. Increased cytokine mRNA expression indicates activation of the immune system compared with healthy cows. Increased expression of MMP-13 mRNA has been found in cows with impaired locomotion and thus could be implicated in development of claw horn disorders.