Management, regulation and environmental impacts of nitrogen fertilization in northwestern Europe under the Nitrates Directive; a benchmark study 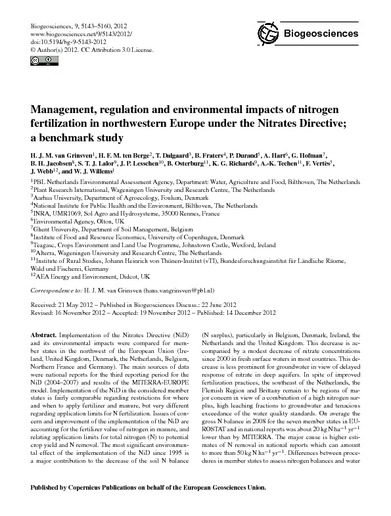 Implementation of the Nitrates Directive (NiD) and its environmental impacts were compared for member states in the northwest of the European Union (Ireland, United Kingdom, Denmark, the Netherlands, Belgium, Northern France and Germany). The main sources of data were national reports for the third reporting period for the NiD (2004–2007) and results of the MITERRA-EUROPE model. Implementation of the NiD in the considered member states is fairly comparable regarding restrictions for where and when to apply fertilizer and manure, but very different regarding application limits for N fertilization. Issues of concern and improvement of the implementation of the NiD are accounting for the fertilizer value of nitrogen in manure, and relating application limits for total nitrogen (N) to potential crop yield and N removal. The most significant environmental effect of the implementation of the NiD since 1995 is a major contribution to the decrease of the soil N balance (N surplus), particularly in Belgium, Denmark, Ireland, the Netherlands and the United Kingdom. This decrease is accompanied by a modest decrease of nitrate concentrations since 2000 in fresh surface waters in most countries. This decrease is less prominent for groundwater in view of delayed response of nitrate in deep aquifers. In spite of improved fertilization practices, the southeast of the Netherlands, the Flemish Region and Brittany remain to be regions of major concern in view of a combination of a high nitrogen surplus, high leaching fractions to groundwater and tenacious exceedance of the water quality standards. On average the gross N balance in 2008 for the seven member states in EUROSTAT and in national reports was about 20 kg N ha−1 yr−1 lower than by MITERRA. The major cause is higher estimates of N removal in national reports which can amount to more than 50 kg N ha−1 yr−1. Differences between procedures in member states to assess nitrogen balances and water quality and a lack of cross-boundary policy evaluations are handicaps when benchmarking the effectiveness of the NiD. This provides a challenge for the European Commission and its member states, as the NiD remains an important piece of legislation for protecting drinking water quality in regions with many private or small public production facilities and controlling aquatic eutrophication from agricultural sources.
ae974a485f413a2113503eed53cd6c53
http://dx.doi.org/10.5194/bg-9-5143-2012