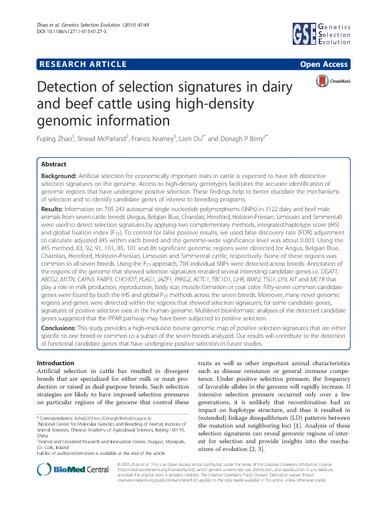 Background Artificial selection for economically important traits in cattle is expected to have left distinctive selection signatures on the genome. Access to high-density genotypes facilitates the accurate identification of genomic regions that have undergone positive selection. These findings help to better elucidate the mechanisms of selection and to identify candidate genes of interest to breeding programs. Results Information on 705 243 autosomal single nucleotide polymorphisms (SNPs) in 3122 dairy and beef male animals from seven cattle breeds (Angus, Belgian Blue, Charolais, Hereford, Holstein-Friesian, Limousin and Simmental) were used to detect selection signatures by applying two complementary methods, integrated haplotype score (iHS) and global fixation index (FST). To control for false positive results, we used false discovery rate (FDR) adjustment to calculate adjusted iHS within each breed and the genome-wide significance level was about 0.003. Using the iHS method, 83, 92, 91, 101, 85, 101 and 86 significant genomic regions were detected for Angus, Belgian Blue, Charolais, Hereford, Holstein-Friesian, Limousin and Simmental cattle, respectively. None of these regions was common to all seven breeds. Using the FST approach, 704 individual SNPs were detected across breeds. Annotation of the regions of the genome that showed selection signatures revealed several interesting candidate genes i.e. DGAT1, ABCG2, MSTN, CAPN3, FABP3, CHCHD7, PLAG1, JAZF1, PRKG2, ACTC1, TBC1D1, GHR, BMP2, TSG1, LYN, KIT and MC1R that play a role in milk production, reproduction, body size, muscle formation or coat color. Fifty-seven common candidate genes were found by both the iHS and global FST methods across the seven breeds. Moreover, many novel genomic regions and genes were detected within the regions that showed selection signatures; for some candidate genes, signatures of positive selection exist in the human genome. Multilevel bioinformatic analyses of the detected candidate genes suggested that the PPAR pathway may have been subjected to positive selection. Conclusions This study provides a high-resolution bovine genomic map of positive selection signatures that are either specific to one breed or common to a subset of the seven breeds analyzed. Our results will contribute to the detection of functional candidate genes that have undergone positive selection in future studies.