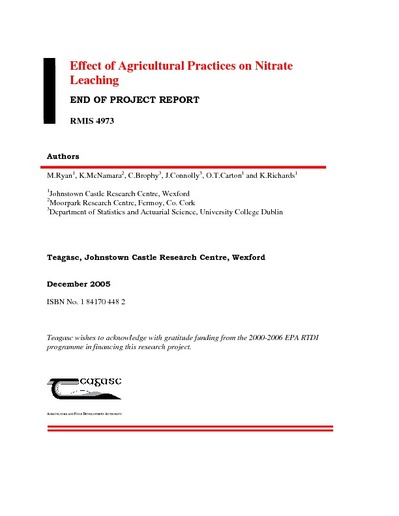 A farm-scale study, carried out at Teagasc, Moorepark (Curtin’s farm), examined the effect of four managements (treatments) on nitrate-nitrogen (NO3-N) leaching over the period 2001-`05. Leaching was measured in these treatments: (T1) plots receiving dirty water and N fertilizer which were grazed; (T2) 2-cut silage and grazing plots receiving slurry and fertilizer N; (T3) grazed plots receiving fertilizer N and (T4) 1-cut silage and grazing plots receiving slurry and fertilizer N. The soil is a free-draining sandy loam overlying Karstic fissured limestone. The mean direct N inputs (kg/ha) for T1-T4 in 2001-`04 were 311, 309, 326, 331, respectively, with stocking rates (LU/ha) of 2.12 - ~2.47. Eight ceramic cups per plot, in 3 replicate plots of each treatment, were used to collect water, on a weekly basis, from 1.0 m deep using 50 kPa suction. There were 33, 37, 26 and 24 sampling dates in the 4 years, respectively. The NO3-N and NH4-N concentrations (mg/l) were determined in the water samples. The annual average and weekly concentration of these parameters was statistically analysed for all years, using a repeated measures analysis. The aggregated data were not normally distributed. There was an interaction between treatment and year (p<0.001). Significant differences (p=0.05) in NO3-N concentrations showed between the treatments in years 1, 2, 4 but not in year 3. For the NH4-N data there was no interaction between treatment and year, p=0.12, or main effect of treatment, p=0.54 but there were differences between years, p=0.01. Mean weekly concentrations were analysed separately for each year. For NO3-N, in years 1, 2 and 4 there was an interaction between treatment and week (p<0.001). With NH4-N, there was an interaction between treatment and week in all 4 years. Dirty water was significantly higher than grazed and 1 cut silage in NO3-N concentrations in year 1; in year 2, dirty water and 2 cut silage were significantly higher than the other treatments while in year 4, dirty water and grazed were significantly higher than the other two treatments. The overall four-year weighted mean NO3-N and NH4-N concentrations were 8.2 and 0.297 mg/l. The NCYCLE (UK) model was adapted for Irish conditions as NCYCLE_IRL. The NCYCLE empirical approach proved to be suitable to predict N fluxes from Irish grassland systems in most situations. Experimental data appeared to agree quite well, in most cases, with the outputs from NCYCLE_IRL. The model was not capable of predicting data from some of the leaching experiments, which suggests that the observed leaching phenomena in these experiments could be governed by non-average conditions or other parameters not accounted for in NCYCLE_IRL. An approach that took into account denitrification, leaching and herbage yield would probably explain the differences found. NCYCLE_IRL proved to be a useful tool to analyse N leaching from grazed and cut grassland systems in Ireland.