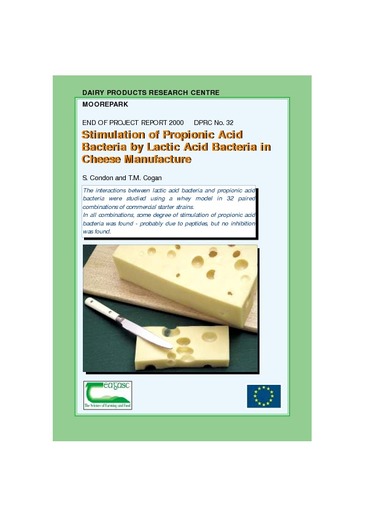 In the manufacture of Swiss-type cheese two successive fermentations occur. During manufacture, lactic acid bacteria (LAB), particularly Streptococcus thermophilus, Lactobacillus helveticus and Lb. delbrueckii subsp. lactis, convert lactose to lactate while, during ripening, propionic acid bacteria (PAB) convert lactate to propionic acid, acetic acid and carbon dioxide (CO2). CO2 is responsible for eye formation and propionic acid results in the typical nutty flavour of Swiss-type cheese. There have been a few reports of interactions between a small number of LAB and PAB but the compounds involved have not been identified. A better understanding of this phenomenon is necessary to select strains of PAB for cheesemaking and improve the quality of hard cheeses. Cheese cannot be used for such a study because of its complexity and the length of time it is ripened. Hence, a simple whey-based model developed by Piveteau et al (1995) was successfully used to study the interactions between LAB and PAB. In this procedure, the LAB were grown overnight in milk and the whey was collected by centrifugation. After neutralisation and filter-sterilisation, the growth of strains of PAB in this whey and in a control whey produced from the same milk by acidification with lactic acid were compared. The objectives of this study were to refine the model of Piveteau et al (1995) to study the interactions between LAB and PAB and to determine the nature of the stimulant(s) produced by the LAB. * Thirty-two combinations of different commercial strains of PAB and LAB were evaluated in a modified whey model. None showed any inhibition and all showed some degree of stimulation but the extent of the stimulation depended on the particular pair of PAB and LAB used. * An inhibitor of PAB was found in milk, which prevented the growth of PAB from low (105 cfu/ml) but not from high inocula (107 cfu/ml). The inhibitor was heat stable (to autoclaving for 15 min), of low molecular mass and could be removed by pre-growth of some but not all starter LAB in milk. * Growth of P. freudenreichii DPC 3801 in control whey was stimulated by peptone, tryptone, casein hydrolysed by the crude proteinase of Lb. helveticus DPC 4571 and by pre-growth of the lactobacillus in milk, but not by vitamins (riboflavin, thiamine, PABA, Ca panthothenate, biotin and nicotinic acid) or minerals (MgSO4, MnCl2, CoCl2 and CuSO4). * Growth of Lb. helveticus DPC 4571 in milk resulted in significant increases in peptide and amino acid production but the amino acids produced did not stimulate the growth of the PAB. Based on these results it was concluded that the stimulation was due to production of peptides by the LAB from casein. * The whey model developed by Piveteau et al (1995) to study the interactions between PAB and LAB was shown to be reproducible. Adjustment of the pH of the whey to 5.4 rather than 6.0, incubation at 24ºC rather than 30ºC and addition of 1% NaCl, to simulate cheese ripening conditions allowed growth of all the PAB tested. * Several chromatographic procedures, including ion-exchange, gel permeation and reverse-phase, high-pressure liquid chromatography failed to categorically identify the peptide(s) responsible for the stimulation of the PAB. In some of these chromatographic systems,the stimulatory activity was shown to be present in several peaks implying that different peptides were involved.