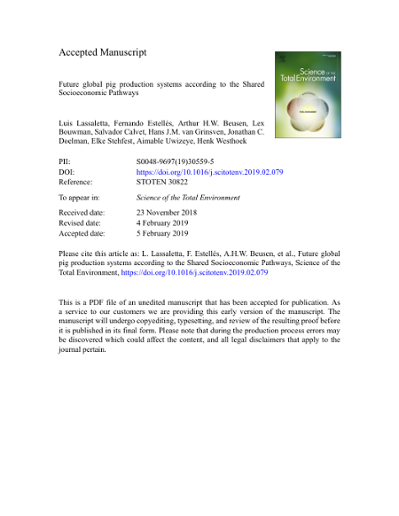 Global pork production has increased fourfold over the last 50 years and is expected to continue growing during the next three decades. This may have considerable implications for feed use, land requirements, and nitrogen emissions. To analyze the development of the pig production sector at the scale of world regions, we developed the IMAGE-Pig model to describe changes in feed demand, feed conversion ratios (FCRs), nitrogen use efficiency (NUE) and nitrogen excretion for backyard, intermediate and intensive systems during the past few decades as a basis to explore future scenarios. For each region and production system, total production, productive characteristics and dietary compositions were defined for the 1970–2005 period. The results show that due to the growing pork production total feed demand has increased by a factor of two (from 229 to 471Tg DM). This is despite the improvement of FCRs during the 1970–2005 period, which has reduced the feed use per kg of product. The increase of nitrogen use efficiency was slower than the improvement of FCRs due to increasing protein content in the feed rations. As a result, total N excretion increased by more than a factor of two in the 1970–2005 period (from 4.6 to 11.1 Tg N/year). For the period up to 2050, the Shared Socio-economic Pathways (SSPs) provide information on levels of human consumption, technical development and environmental awareness. The sustainability of pig production systems for the coming decades will be based not only on the expected efficiency improvements at the level of animal breeds, but also on four additional pillars: (i) use of alternative feed sources not competing with human food, (ii) reduction of the crude protein content in rations, (iii) the proper use of slurries as fertilizers through coupling of crop and livestock production and (iv) moderation of the human pork consumption.