Denitrification potential in subsoils: A mechanism to reduce nitrate leaching to groundwater 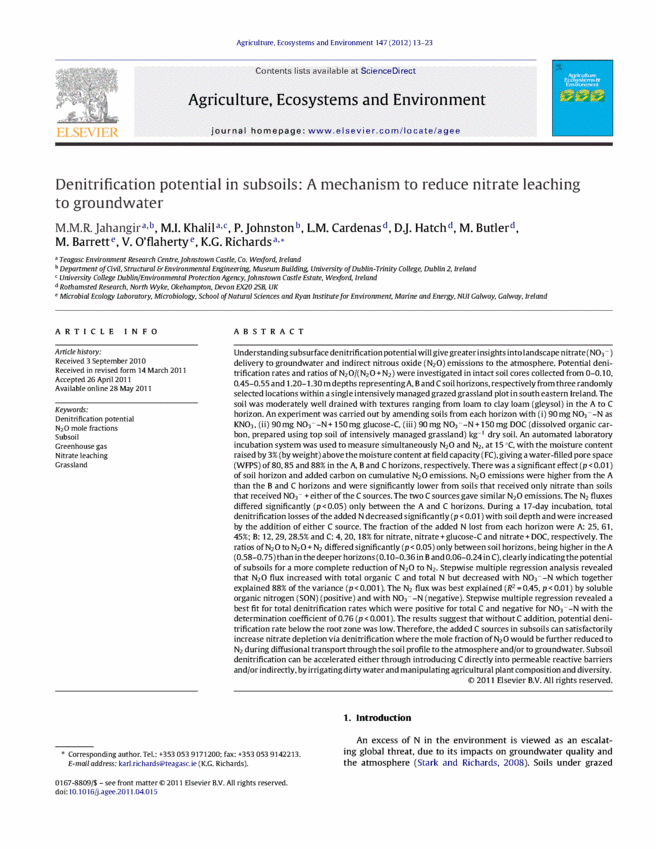 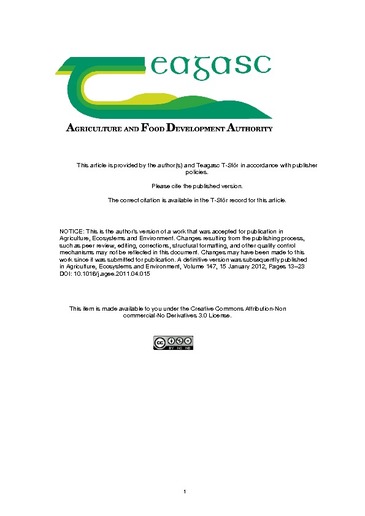 Understanding subsurface denitrification potential will give greater insights into landscape nitrate (NO3−) delivery to groundwater and indirect nitrous oxide (N2O) emissions to the atmosphere. Potential denitrification rates and ratios of N2O/(N2O + N2) were investigated in intact soil cores collected from 0–0.10, 0.45–0.55 and 1.20–1.30 m depths representing A, B and C soil horizons, respectively from three randomly selected locations within a single intensively managed grazed grassland plot in south eastern Ireland. The soil was moderately well drained with textures ranging from loam to clay loam (gleysol) in the A to C horizon. An experiment was carried out by amending soils from each horizon with (i) 90 mg NO3−–N as KNO3, (ii) 90 mg NO3−–N + 150 mg glucose-C, (iii) 90 mg NO3−–N + 150 mg DOC (dissolved organic carbon, prepared using top soil of intensively managed grassland) kg−1 dry soil. An automated laboratory incubation system was used to measure simultaneously N2O and N2, at 15 ◦C, with the moisture content raised by 3% (by weight) above the moisture content at field capacity (FC), giving a water-filled pore space (WFPS) of 80, 85 and 88% in the A, B and C horizons, respectively. There was a significant effect (p < 0.01) of soil horizon and added carbon on cumulative N2O emissions. N2O emissions were higher from the A than the B and C horizons and were significantly lower from soils that received only nitrate than soils that received NO3 − + either of the C sources. The two C sources gave similar N2O emissions. The N2 fluxes differed significantly (p < 0.05) only between the A and C horizons. During a 17-day incubation, total denitrification losses of the added N decreased significantly (p < 0.01) with soil depth and were increased by the addition of either C source. The fraction of the added N lost from each horizon were A: 25, 61, 45%; B: 12, 29, 28.5% and C: 4, 20, 18% for nitrate, nitrate + glucose-C and nitrate + DOC, respectively. The ratios of N2O to N2O + N2 differed significantly (p < 0.05) only between soil horizons, being higher in the A (0.58–0.75) than in the deeper horizons (0.10–0.36 in B and 0.06–0.24 in C), clearly indicating the potential of subsoils for a more complete reduction of N2O to N2. Stepwise multiple regression analysis revealed that N2O flux increased with total organic C and total N but decreased with NO3 −–N which together explained 88% of the variance (p < 0.001). The N2 flux was best explained (R2 = 0.45, p < 0.01) by soluble organic nitrogen (SON) (positive) and with NO3−–N (negative). Stepwise multiple regression revealed a best fit for total denitrification rates which were positive for total C and negative for NO3 −–N with the determination coefficient of 0.76 (p < 0.001). The results suggest that without C addition, potential denitrification rate below the root zone was low. Therefore, the added C sources in subsoils can satisfactorily increase nitrate depletion via denitrification where the mole fraction of N2O would be further reduced to N2 during diffusional transport through the soil profile to the atmosphere and/or to groundwater. Subsoil denitrification can be accelerated either through introducing C directly into permeable reactive barriers and/or indirectly, by irrigating dirty water and manipulating agricultural plant composition and diversity.